Avengers Endgame is already in theatres and has grossed over a billion dollars in income just over the weekend. The film is the culmination of the 10-year journey spent over 22 films, and it was indeed every MCU fan’s dream come true.

Why is the leaked footage illegal?

During the filming of the Avengers Endgame, the Russo brothers kept everything under wraps to avoid leaking any vital information or spoilers. One of the ways they did it was forbidding the cast from posting any footage from the set online. But one of the stars of Avengers Endgame has recently posted a video from the shoot on his Instagram.

Chris Pratt, who plays Star-Lord in the MCU, put up a video where almost the entire cast of the film can be seen. The behind-the-scenes videos show the crew filming a major scene in Endgame. The entire seems to have gathered in order to defeat Thanos, who just wiped half of the universe’s population from existence in the last film.

Who is in the video?

In the end, Pratt turns the camera towards himself, and says, “this is a really illegal video.”

You can catch Avengers: Endgame in theatres today. 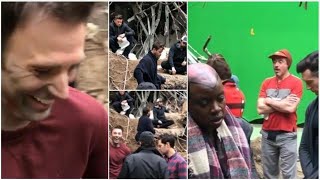