Kobe Bryant has passed away and it has left the entire basketball community in shock and sadness. Every NBA player is emotional over the legend passing away at such a young age and has been sharing their heartfelt messages in loving memory of Kobe. While Kobe was one of the best NBA players of all time and no one could take over his legacy, fans of the sports are wondering who could be the next persona to take over and replace Kobe Bryant.

Continuing to move the game forward @KingJames. Much respect my brother 💪🏾 #33644

It would be a disrespect to say any player wants to be a Kobe Bryant replacement, but in terms of numbers and titles, there are a few players who could come close to the achievement. LeBron James, Kawhi Leonard and Giannis Antetokounmpo could be the next NBA superstars that could prove to be ideal Kobe Bryant replacements.

LeBron James is right now the closest player to Kobe Bryant we have, who is kind of a legend in his own way. King James has won three NBA titles for teams including Miami Heat and Cleveland Cavaliers and could win his fourth for Lakers in the current NBA season. Further, LeBron James is a four-times NBA MVP award winner and recently surpassed the total points tally of Kobe Bryant, where Kobe himself congratulated him and it is also his last tweet.

Kawhi Leonard is also an amazing player who has won two NBA titles for Spurs and Raptors where both the teams were the underdogs. It basically implies that Leonard has the ability like Kobe Bryant where he can carry the team by himself. Also, Kawhi Leonard is a two-times NBA finals MVP and even in the current season, he is easily beating out LeBron James and the Clippers could defeat the Lakers in NBA Western Conference finals to play the NBA title game.

Giannis Antetokounmpo may have not won an NBA title but in the last season, he was named as the MVP of the year despite Bucks not making it to the finals. The Greek Freak is only 25 years old and he has been compared with Kobe Bryant in terms of his court presence. Giannis has a lot of potentials and with a better team such as Lakers and Warriors, he could easily win many NBA titles in the future. 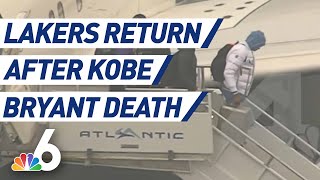