Khabib Nurmagomedov is among the most feared names in UFC. The Russian wrestler likes to pin his opponents down to the ground and make them submit! He did it to some of the biggest stars in the lightweight division such as McGregor and Poirier. With each match, his stature in the company continues to grow. However, Khabib is all set to run into a final roadblock – Tony Ferguson.

Let us take a closer look at Khabib Nurmagomedov vs Tony Ferguson and see if this match is indeed going to happen, and who will win it if this happens!

Dana White has tried booking this fight 4 times in the past, but it never really took place, thrice due to one of the two being injured and once due to a problem with the weigh-in. However, could this finally happen now? With UFC 243 and UFC 244 already set and McGregor vs Poirier 2 expected to headline UFC 245, Khabib vs Tony Might just happen in January 2020.

What makes this fight interesting is the fact that Khabib has never lost, while he has never even bled. On the other hand, Tony Ferguson likes to maul and hurt his opponents and is on a long winning streak himself. These are two men with very different fighting styles facing off for the first time and the results are going to be very interesting as one of the two fan favorites will end up losing here!

Will it be Khabib’s First Loss?

This is what makes the match really interesting. There is a good chance that Khabib Nurmagomedov vs Tony Ferguson will end up being the first-ever loss for the Russian! The biggest reason being Tony isn’t the kind of wrestler you can pin down to the mat and while he is an excellent fighter, he can also make you submit! Remember the guillotine that Khabib escaped from during his match with Poirier? Tony won’t let something like that happen! 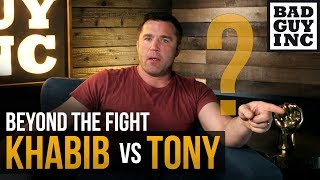