Iran attacked the American military bases in Iraq with a series of ballistic missiles as a reply to the assassination of General Soleimani in a US drone attack ordered by President Donald Trump. Mohammad Javad Zarif, the Iranian foreign minister made a tweet announcing the same and said the attacks were done in response to the killing of Maj. Gen. Qassim Suleimani.

All is well! Missiles launched from Iran at two military bases located in Iraq. Assessment of casualties & damages taking place now. So far, so good! We have the most powerful and well equipped military anywhere in the world, by far! I will be making a statement tomorrow morning.

This missile attack isn’t just against the United States – it is against all coalition forces at these bases.

There has been no confirmation on any kind of causalities and Trump said that they are investigating the matter and ready to reply with appropriate force. It seems that the Iranian President Hassan Rouhani is trying to boast the US missile attack and save his image in the world media, showing that they won’t be dominated by the United States.

Iran leaders have been saying that they do not wish to escalate the war but are perfectly capable of replying to any kind of aggression with proper force. It has been circulated in local media that Iran has fired over 30 ballistic missiles at the Iraq base, but the real number is around 20 or something. Hassan Rouhani has been using the missile attack to gain back the trust of his public and have a strong image within the international media.

Ayatollah Ali Khamenei, the supreme leader of Iran has been calling the attacks as a slap in the face of the United States. He has been saying that the presence of America in their region must come to an end and also praised General Suleimani and called him a brave warrior

The Oil and Gold prices have increased a lot in the Asian market and other international regions after the US-Iran missile conflict. The prices for Brent crude (international oil benchmark) have jumped above $70 a barrel in futures markets which is nearly a 4 percent raise.

The stock markets in major countries have seen a tremendous shift and the economy is dwindling. Gold prices have also hit above $1,600 and it seems that Iran is just doing it deliberately. The whole war tension with the US is nothing but a ploy to raise prices. 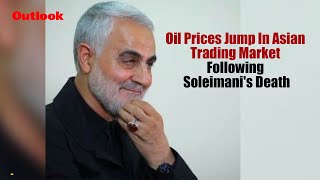