Lucy Welcher, a young TikTok influencer with more than 80,000 followers, recently shared a video with her fans in which she said she will never get a regular job because she is too pretty.

She said in the video.

Her viewers were quick to put her down, calling her lazy and spoiled and saying that she can’t live in a society without contributing in some way. Even pretty women have no choice but to work. 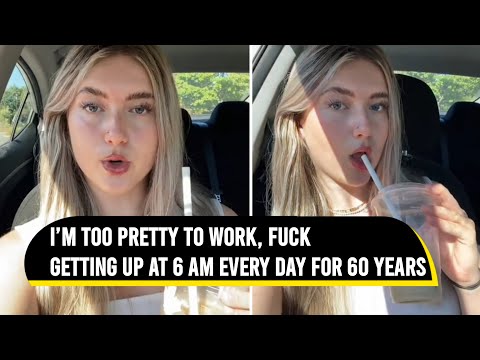 Someone who said their job was worse than Welcher’s said,

I hope you get humbled girl, you need it. Looks have to nothing to do with working and it’s sad you have that mentality,

another critic chimed in.

Like with most crazy ideas, though, some of her fans quickly agreed with her, saying that beautiful women shouldn’t have to work regular jobs like everyone else.

Sending this to every employer I’ve ever had,

one user agreed with her.

One desperate commenter even said,

You can be my housewife I make 6 figures a year just make sure the house is clean and food is on the table.

After her video went viral on the internet, she said that it was all a “joke” and not meant to be taken seriously. But this person with a lot of influence does have a real job. She said she got a promotion recently, but she didn’t say where she works.

I’m starting a new position at my job today, so instead of folding towels, I’m going to be on the desk,

I’m very nervous to start on the desk because although I may look very beautiful, smart, and talented, I’m not actually smart at all.

It’s all for likes and comments and has nothing to do with her real life. She only just made a silly remark on social media.