GTA 6 release date has not been announced by Rockstar Games even though the game has become one of the most popular upcoming titles. It has been almost 7 years since GTA 5 released and gamers are still enjoying the open-world action-adventure game. But everyone has now played the entire series and wants something new which would be nothing other than Grand Theft Auto 6 game to come out.

There are a lot of leaks and rumors regarding GTA 6 gameplay, features and launch date, even the recent Rockstar Games artwork sparked the rumor mill. The latest GTA 6 leaks claim that the game will unveiled in a March event along with Sony PS5 as an exclusive title to the next-gen gaming console.

GTA 6 latest leaks are coming from a popular YouTuber named MrBossFTW who suggests that the game can launch sooner than expected. There is a mysterious poster on 4chan with the title “March 25th. GTA VI” and there is also a Rockstar Games logo behind the poster.

GTA 6 Announcement Rumored For This Month

While the leaked poster can just be another hoax, 4chan has an incredible record of leaks and the release date of another Rockstar Games title, Red Dead Redemption 2 was leaked accurately via 4chan. Also, GTA Online updates have been previously leaked which has intrigued GTA fans, but until an official announcement comes, one must take this absolutely with a grain of salt.

GTA 6 will be a Sony PS5 Exclusive

Sony PlayStation 5 is also rumored to launch at the end of March 2020 which is everyone has linked that GTA 6 will also come together with the console. There are already rumors that PS5 will debut alongside a few exclusive games such as God of War 5 and GTA 6. If the rumors are true, it would surely give the Sony’s console a major push over Xbox Series X as a large fanbase would buy PS5 just for playing GTA 6. 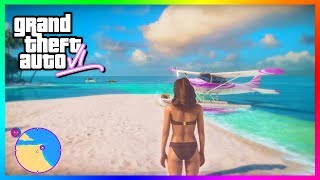