GTA 6 is rumored to be in works and for the first time, there has been an official hint from the Rockstar Games. The studio has been totally silent on their upcoming Grand Theft Auto installment but the recent website and Youtube channel updates suggest that the latest game is coming soon.

Rockstar Games recently added a new artwork on their website front page along with a video on their YT channel which is set to private at this moment. Fans are speculating that it is related to the upcoming GTA 5 sequel and confirms that GTA 6 is in works and the game trailer will release very soon.

Rockstar Games added a new artwork on the front-page of their official website which shows a golden robot lady holding their logo. There is also a champagne bottle with rose petals and a glass on the star. While it says nothing about GTA 6, there are so many hints and all of them point towards the game.

Also, the Youtube channel of Rockstar Games earlier had 258 videos, but now the number is increased to 259 but the new video is not visible as it is set to private. It won’t be a stretch to say that it could be the upcoming GTA 6 trailer and the gaming studios will announce the title soon.

GTA 6 is rumored to launch next year but the first trailers of such big games are usually released years in advance. There are also several other reports confirming the existence of GTA 6 including Rockstar Games job listings, which is a massive hint that something big is happening. Fans are hoping that GTA 6 trailer reports are true and they could watch the first footage of how their favorite game looks like and they can play it soon. 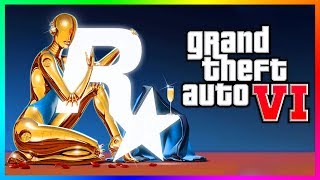