Gotham Season 6 is something all the fans of this Batman-themed DC show are waiting for since the last year. The last episode of Gotham aired on April 25, 2019, which shows Bruce Wayne completing his transformation into Batman finally and involved a ten years time leap. While it could be considered as a definitive ending to the show, Gotham was Fox’s highest-rated show and they would love to come with season 6 of the crime drama.

Fans want more of the Batman prequel series and have demanded Gotham season 6 from the makers. Gotham season 6 renewal could be possible and it would involve an older Batman and Commissioner James Gordon.

Gotham season 5 ended almost all the loose ends and unlike the previous seasons, it didn’t end on a cliffhanger. James Gordon finally put a mustache and started to look more like his comic book counterpart and even Bruce Wayne put on a suit, even though it is still kind of a disguise and not the Batsuit.

There is so much more left to explore in the world of Gotham and season 6 could be easily be renewed in the near future. Gotham star Donal Logue hinted that the show will be open to a revival, chances for that to happen looks slim. Although, Gotham season 6 could focus on some other aspect of Batman world, especially after Warner Bros just released Joker and are coming up with ‘The Batman’ movie.

Gotham Season 6 will be Set in Future

Gotham Season 6 could easily feature an older James/Jim Gordon set in the future where Batman has vanished or gotten old. While the show acted as a prequel to most of the Batman stories, there are also doors open to come up with a sequel.

Batman Beyond is the closest thing fans have seen about a post-Batman world and Gotham season 6 could adapt that. Instead of Terry McGinnis, they could have older Gordon his son to take the spotlight and show the conditions of Gotham city after Batman is gone. 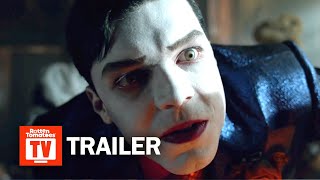