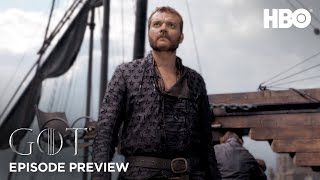 But, before we discuss any further, let’s take a quick recap and see what happened in the fourth episode. Jon finally reveals his true identity to Sansa and Arya. He makes them swear not to reveal it to anybody. But, Sansa conveniently spills the beans to Tyrion. Tyrion starts discussing this matter with Varys. They discuss the possibility of Jon Snow (Aegon Targaryen) being a better ruler than Dany.

But, Varys’ stance was quite clear from the conversation. He was ready to betray Daenerys and proclaim Jon as the king. On the brighter side, Tyrion wants to be loyal to Dany. He even proposes to get Jon and Dany married. So, let’s see what we can decipher from the photos of Game of Thrones season 8 episode 5.

Here we can see Jon and Varys in discussion. Judging from the landscape, they are in Dragonstone, where Daenerys is hiding. It might mean that when Jon arrives in Dragonstone to join Dany, Varys will jump at his chance to convince Jon.

The next picture is a little saddening. We can see Daenerys looking really sad as she has opened her braids. She’s probably mourning the loss of Missandei and Rhaegal. Also, her winning chances seem quite bleak now.

However, the silhouette that we can see beside Dany is definitely of Tyrion. As we had seen in the promo for Game of Thrones season 8 episode 5 as well. We see Tyrion approaching Dany while she looks over at the sea.

Here, we can see Grey Worm in Dragonstone. It’s no surprise that he is sticking around with Daenerys. After he witnessed Missandei beheading in front of his eyes, he surely wants revenge.

In another photo leak, Jon, Ser Davos and Tyrion standing in front of the castle in King’s Landing. It surely looks like they are ready to attack. So, they are still in alliance with Daenerys and are ready to fight for her.

What will happen after the final battle ends? Will Varys betray Dany successfully. Or will Daenerys find out about his true intentions? Most importantly, will Dany get buried under her other male counterparts’ will power? Or, will she rise as the actual ‘Mother of Dragons’ and burn everything down. We have little choice other than to wait and watch.