For the fans who made the song “let it go” as their national anthem, small details about the upcoming sequel are enough to excite you all.

The official trailer of Disney’s Frozen 2 gave a glimpse of the new look adapted by Anna and Elsa. Disney released the trailer without providing many clues but they surely have started circulating theories.

Elsa was seen tougher and stronger than before in the Frozen 2 trailer. She is about to embark on a mission to change her and Anna’s life. 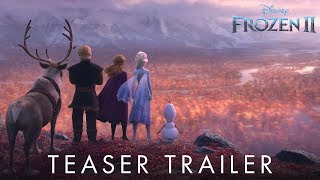 The official trailer clip of Frozen 2 displayed Elsa in a darker aura.

Elsa, played by Idina Menzel, gave away unexpected hints to expect in Frozen 2. The actress teased the fans in one of her interviews and said that the fans will see a different story compared to Frozen chapter 1.

The Frozen 2 is rather a superhero flick than a typical fairytale storyline anymore.

Theory about Elsa and Anna’s parents

Dropping further hints, Idina Menzel aka Elsa in Frozen 2, is afraid of superpowers at first in the film. She later learns about superpowers and control in a way that is going to be helpful to others.

The theories by actress Idina Menzel are later confirmed by an insider.

In an interview with the Hollywood Reporter, Idina Menzel revealed:

“It resonates, even more, today considering that it’s a story that is about women finding what makes them extremely powerful and beautiful in their life. It’s about not compromising who you are. It’s about taking that thing that makes you so powerful and harnessing it and using it to change the world for the better.”

And for the desserts, Elsa revealed that their parents are still alive. However, they are trapped somewhere and Anna and Elsa will use their superpowers to set them out.

A lot of new incredible truths are waiting for us in the upcoming film. Frozen 2 is hitting theatres on November 22, 2019.