Serie A Champions Juventus have signed an exclusive deal with PES 2020 produced by Konami. This is bad news for Juventus fans who will thus miss out official Juventus kits, players names, stadiums in FIFA 2020.

Pro Evolution Soccer was awarded the Best of Game Critic Awards 2020. The Esports players who are Ronaldo fans would especially be hit hard the news since Ronaldo’s official merchandise will now not be available in FIFA 20. Juventus signed Ronaldo from Real Madrid in a historic transfer leaving out Gonzalo Higuain. Juventus have also signed defender De Ligt this season.

We are incredibly honoured & excited to announce our EXCLUSIVE partnership with the most successful club in Italy; @Juventusfcen.

Juventus announced the news on its official website. The deal gives PES the liberty to replicate the on field characters of Juventus move by move. The Juves are delighted upon sharing the news.

“The new and exciting partnership with Konami will see the eFootball PES series have exclusive use of Juventus intellectual property within console football video games,” Juventus wrote on its official website.

🎮 @officialpes 2020 will be the only video game that features Juventus' official kits, team name and stadium pic.twitter.com/vf6Xg60WG1

The announcement further states that player analytics including full 3-D body scan will be used to give a real life experience in the game.

Konami Digital announced the news with pride too. Jonas Lygard was present for comment and he took great proud in announcing their acquisition for the exclusive rights of Juventus.

Another 7 Juventus PES 20 players from pesmobile

“Our comprehensive partnership with Juventus FC, one of the greatest teams in the world, is a clear statement of intent for eFootball PES 2020,” The Senior director, Brand Development at Konami Digital said.

The Cristiano Ronaldo and EA Sports’ FIFA’s mutual fans will have a hard time playing the game. Ronaldo’s current club Juventus can only feature in PES and FIFA 20 will have everything faked.

EA sports also dropped Ronaldo as the official face of FIFA 19 when charges of rape loomed around him. The 4 times Ballon D’Or rubbished claims and FIFA also remarked that the decision was purely to promote younger talent.

Giorgio Ricci, the financial officer from Juventus also said that the step will increase the club’s popularity among younger, game-loving fans.

The new names of Juventus and its players might display a different look :

All the best FIFA fans for the frustrating experience. The move might urge some fans to switch to the Konami produced PES 2020 over FIFA 20. 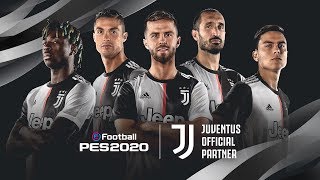