NFL Week 2 Sunday had 14 games and it means the fantasy football owners had so much to process. The rankings for their favorite players can have a huge change based on their performance last night. While some of them had a positive impact, others have lost some points. Here are the NFL Week 2 impact on fantasy football rankings of Todd Gurley, Bobby Wagner, Cory Littleton and Jared Goff.

Todd Gurley is finally back in form as predicted and scored a touchdown in the game against the Saints. The running back had 16 carries for 63 yards and made three receptions for just 4 yards. The Rams have been using Gurley very carefully to avoid any kind of injury or excessive work. Malcolm Brown can get some forward passes but Gurly will still be the main RB in the Week 2 game against the Browns.

Todd Gurley II gets his first touchdown of the season. #PeckerNation pic.twitter.com/VyGba2uJSX

Wagner played an important role in the Seahawks vs Steelers game to bring the Seattle team to the victory line. The linebacker made seven tackles out of which four were solo and defended one pass which lead to the Seahawks winning at 28-26 over the Steelers. Bobby Wagner did a great job of defending Ben Roethlisberger as the Pittsburgh quarterback was injured in the first half. Seattle will face the New Orleans Saints in the Week 3 game and Wagner can again score big in the possible absence of Drew Brees.

Bobby Wagner started by dumping a bucket of water. Russell Wilson was trying to give Pete Carroll the game ball. Then, bonkers in #Seahawks' postgame locker room following Carroll's 100th win, on his 68th birthday https://t.co/qTfsK3L582

Cory Littleton was the main reason behind the Rams defeating the Saints in the Sunday night game. The linebacker made eight tackles (five solo) and Rams easily won with 27-9 over the Saints. Littleton also defended two passes and was very close to making an interception. While Cory has was superb in the Week 1 game with 14 tackles and 1 interception, the same can be repeated in the Week 3 game against the Browns.

Fun fact: Since 2017, Cory Littleton has 19 PBU. That's tied for the most of any linebacker

Everyone who had picked Los Angeles Rams players had a great Sunday as quarterback Jared Goff pulled up some great numbers. He completed 19 out of 28 passes and rushed for 283 yards. Goff’s touchdown sealed the second victory of Rams in NFL 2019 season. The best part was Goff rushing for a score from the goal line which boosted his fantasy rankings. The Browns defense is kind of a joke and Goff can improve his numbers in the Week 3 game. 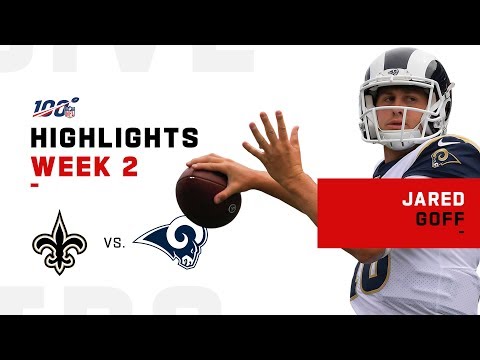