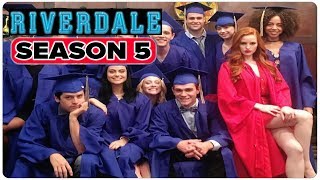 The popular teen drama Riverdale is based on an Archie comics’ character with the same name. After four successful seasons, the fifth season is coming soon.

The fans are overly excited for the new season.

The fifth season of the teen-series will be released in October 2020. According to the CW Network’s updates, the Riverdale’s new season will successfully woo the fans.

Thinking of all that went into Jughead's plan. Stream the latest before a NEW episode streams Thursday: https://t.co/LWIRBSp7Ue #Riverdale pic.twitter.com/srMRakcNgP

An average of 808,000 viewers are currently watching season four of the show. However, comparatively, the previous seasons had more viewers. Despite the reduction in the viewers, CW Network decided to continue the storyline.

There are no official updates about the new plot of the show. However, it is expected to resolve the cliff-hangers in the fourth season.

Time to put on a show. Stream the latest before a NEW episode streams next Thursday: https://t.co/LWIRBSp7Ue #Riverdale pic.twitter.com/oqJspWGtzZ

The show has a very popular cast. The stars starring in the new season will include,

Where to Watch Riverdale Season 5?

Delay due to COVID-19

There is no official confirmation about the release. It is no secret that the entire entertainment industry is on hold due to the quarantine. However, the dates will extend off the lockdown extends as well.