Emily Blunt and John Krasinski could be soon joining the Marvel Cinematic Universe as they have got the rights to Fantastic Four back after the Disney-Fox merger. The first family of Marvel will soon be a part of MCU and everyone can forget the previous attempt from Fox which was a terrible failure.

RUMOR: @MarvelStudios has reportedly met with actress Emily Blunt regarding a possible role in a future MCU movie! https://t.co/CHxATiDPj2 pic.twitter.com/JdRWGOQ0dI

Most of the fan-cast have already suggested Blunt and Krasinski pair in the roles of Sue Storm/Invisible Woman and Reed Richards/Mr. Fantastic for the Fantastic 4 movie. Even Disney heads are interested in the casting choices, and we could see very soon that John Krasinski-Emily Blunt pair in Marvel’s Fantastic Four.

Reed Richards and Sue Storm could easily be integrated into Marvel Universe and there are already a lot of theories to introduce the power couple. In the last Spider-man movie, we saw that Stark’s Avenger tower has been sold off and it could easily be renamed as Baxter Building, which is the house of the Fantastic Four family.

If John Krasinski and Emily Blunt get casted in Fantastic 4 I will give everyone who retweet this $20👀 pic.twitter.com/uJ2erCuCm9

Also, Reed Richards could be shown as Peter Parker’s college professor or some sort of science mentor. In the same away, Sue Storm can be shown as someone working in the new Baxter Building or they could even show them as an established couple. Emily Blunt and John Krasinski are married in real life which makes the casting much better as they would have natural chemistry.

It won’t be the first time that Emily Blunt and John Krasinski have been associated with Marvel movies. Blunt was almost cast as Captain Marvel and Krasinski was the first choice to play Captain America.

Marvel always had plans to cast both the actors and now that their schedule from ‘A Quiet Place 2’, ‘Jack Ryan Season 3‘ and ‘Jungle Cruise’ gets free, John Krasinski-Emily Blunt could act as Mr. and Mrs. Fantastic in the upcoming Fantastic Four movie. 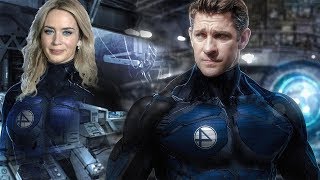