Apple has unveiled the next iteration of iOS 12, the iOS 12.3 update, earlier this week. The update brought some major and minor bug fixes and changes.

However, the most compelling question after every major update is about battery life. Has it got worse or it has improved? and the YouTube channel iApple Bytes has decided to find the answer.

iApple Bytes used the iPhone 6 and iPhone 6s to compare the results of battery drain on iOS 12.3 update and iOS 12.2. The phones were put to test using varying benchmarks using Geekbench 4.

For the unknown, Geekbench 4 is a benchmarking application which employes various processor-intensive tests to find out the battery life.

Geekbench 4 is used to put the device under a constant workload. The benchmark is used to generate a score by analyzing the volume of work the device was able to handle before it ran out of battery. 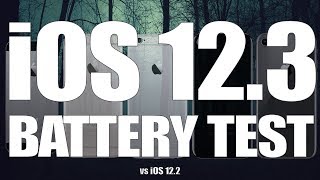 The channel explained that they used iPhone 6 and iPhone 6s with new batteries with 100% battery health and the room temperature was kept at 21-degree Celsius.

The channel assured the viewers that don’t have to worry about the battery drain on iOS 12.3 as the update is safe.

It is helpful to know that the update will not deteriorate the battery and performance of the phone.

Apple has made fixed several bugs related to the performance of the device but the major change is the addition of a new TV app.

This new TV app will allow the users to watch and subscribe to the third-party service like Starz, HBO, Showtime and several others. The iOS 12.3 update also brings support for AirPlay 2.

This update has also added the For You tab to the Apple Music app. The users of Apple News+ will get better recommendations and now they can follow a magazine.

Apple iOS12.3 is available for all the devices running the compatible version of iOS 12.