Derrick Rose is the face of NBA trade rumors from the Detroit Pistons team and a lot of NBA clubs are interested in the player. The point guard is making a lot of rounds recently and two to three teams are looking to sign him before the NBA February 6, 2020, trade deadline.

Los Angeles Lakers and Philadelphia 76ers are the two names primarily searching for point guards before the deadline who can assist them in the NBA 2019-20 season playoff games. Los Angeles Clippers have also inquired about Derrick Rose with the Pistons and even they could end up signing him before the trade deadline.

Detroit Pistons could be looking to upgrade their roster and trade out Derrick Rose who is 31-years-old and is under contract for just one more year. The Pistons are not title contenders for this season and by the time they rebuild to a stronger roster, Rose won’t be a part of their team.

The @DetroitPistons are 3-1 since Derrick Rose became the starting PG pic.twitter.com/OmD3myKr0X

The Pistons are currently at 16-28 record in NBA Eastern Conference points table and won’t make it to the playoffs most probably. It means the Pistons would be a seller at the trade deadline and Derrick Rose could get them a high return due to his incredible performance.

Derrick Rose has been playing terrific in this NBA season with an average of 18.3 points, 5.9 assists and 2.4 rebounds per game. Even though he is not the same 2008-09 Rookie of the Year and 2010-11 NBA MVP level player but he has amassed plenty of experience throughout the years.

Rose is a productive veteran who could prove beneficial to the teams such as Lakers, Clippers and 76ers who looking to upgrade their rosters before the February 6 trade deadline. The point guard could score from the backcourt for the NBA club which makes a trade deal for him. 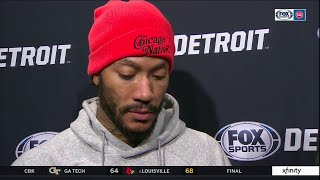