Demon Slayer: Kimetsu no Yaiba Chapter 196 raw scans have been leaked and they show the full effect of Tamayo’s medicines on the demon Muzan. As per the untranslated Demon Slayer 196 scans, Muzan is in big trouble after Tamayo’s cat injected him with some sort of chemical medicine.

It means that the Tanjiro vs Muzan battle will finally come to an end but Nezuko arriving in the next manga chapter could still bring a lot of surprises. Here is everything you need to know about Demon Slayer: Kimetsu no Yaiba Chapter 196 release date, raw scans leaks, plot spoilers, theories and ways to read online the manga chapters.

Demon Slayer Chapter 196 spoilers reveal that Tamayo has injected Muzan with some lethal chemicals that will multiple effects to weaken the demon. The first effect of the medicine was to turn Muzan back into a human and if that doesn’t happen, the demon will age rapidly. It was revealed in the previous Demon Slayer chapters that Muzan has been aging 50 years per minute and had aged 9000 years throughout the battle.

There will be more effects of the medicine in “Demon Slayer: Kimetsu no Yaiba” Chapter 196 as Muzan continues to fight against Tanjiro and Obanai. The third effect is to stop Muzan from regenerating so that he can heal himself but there is also a fourth and most dangerous effect. Tamayo said that “The fourth effect is to destroy the cells because the first three effects help to weaken the body,” to a weakened Muzan. Demon Slayer 196 manga chapter will also mark the return of Nezuko, but the half-demon might help the demon instead of her brother Tanjiro.

Demon Slayer: Kimetsu no Yaiba Chapter 19 will release on this Sunday, March 1, 2020, as per VIZ’s official website. The raw scans for Demon Slayer 196 will be leaked out 2-3 days prior on the internet around February 28, but it would be better to wait for the official release.

Demon Slayer: Kimetsu no Yaiba, Ch. 195: As sunrise draws near, the fighting becomes desperate. Who will fall first? https://t.co/U53ugVfbbw pic.twitter.com/o8V5GeNxvg 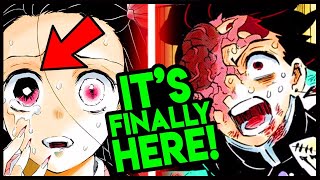