Demon Slayer: Kimetsu no Yaiba Chapter 196 will show the end of Tanjiro vs Muzan fight and Nezuko will be the main factor to affect the outcome. The demon has been weakened a lot and it might give a chance to the injured Tanjiro for finishing the battle, but Nezuko coming back in the mix is totally uncertain.

There are many Demon Slayer 196 theories which claim that Nezuko might turn into a human finally in the manga series. It is also said that Muzan can absorb Nezuko’s powers to walk in the day time and continue the fight even after dawn. Here is everything you need to know about Demon Slayer: Kimetsu no Yaiba Chapter 196 release date, raw scans leaks, plot spoilers, theories and ways to read online the manga chapters.

Demon Slayer: Kimetsu no Yaiba Chapter 196 storyline may focus on Muzan mainly as the demon has already proved his endurance. All the pillars combines are not enough to beat Muzan even though he has been drugged to age 9000 years. Nezuko coming on the battlefield could certainly help Tanjro in “Demon Slayer” Chapter 196 as she can augment her brother’s fire sword attacks through her demonic powers.

But there is a big problem as the previous chapters of the Demon Slayer manga series have hinted that Nezuko is on the brink of turning into a normal human. While it is a good thing, the timing is not right as her fire powers were needed to cure the pillars poisoned by Muzan’s venom. It also brings the main Demon Slayer Chapter 196 leaks and spoilers which indicates that Muzan will absorb the day walking powers from Nezuko and keep fighting Tanjiro even after dawn.

Demon Slayer: Kimetsu no Yaiba Chapter 19 will release on this Sunday, March 1, 2020, as per VIZ’s official website. The raw scans for Demon Slayer 196 will be leaked out 2-3 days prior on the internet around February 28, but it would be better to wait for the official release.

Demon Slayer: Kimetsu no Yaiba, Ch. 195: As sunrise draws near, the fighting becomes desperate. Who will fall first? https://t.co/U53ugVfbbw pic.twitter.com/o8V5GeNxvg 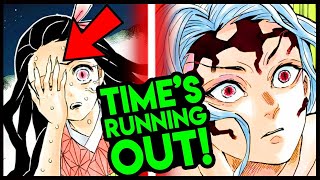