Dallas Cowboys have a good chance of ending the NFL Week 16 with a victory as they will face the Philadelphia Eagles in the last week of 2019 NFL season. The Cowboys are currently at the top in NFC East rankings and by defeating the Eagles this Sunday, they can come out at the top. While the Philadelphia Eagles have lost their 3 top wide receivers to injury, they are under-dogs for the Sunday game despite being a home team.

But it won’t be even easy for the Dallas Cowboys as their leading quarterback Dak Prescott is injured and it is not sure whether he will play in the Cowboys vs Eagles game. Here are the latest reports and updates on Dak Prescott’s injury and how it can affect the NFL Week 16 game of Dallas Cowboys vs Philadelphia Eagles.

Dak Prescott had a shoulder injury in the last week game where the Dallas Cowboys managed to beat the Los Angeles Rams. An MRI report confirmed that there was no serious damage to the quarterback, but he has a sprained AC joint. It means that Prescott won’t be able to throw the ball for few days and even Cowboys head coach Jason Garrett confirmed that on Wednesday.

#Cowboys RB Ezekiel Elliott said Dak Prescott’s injured AC joint is something he’s had previously and can’t imagine throwing with it. But he also left zero doubt that he expects Prescott will play vs #Eagles.

As per the sources, Cowboys QB Dak Prescott won’t be throwing the ball till Saturday so that hand injury doesn’t get worse. It depends on the next few days that how quick Prescott recover, but he isn’t a hundred percent healthy at the moment to play in the Cowboys vs Eagles Sunday game.

Will Dak Prescott Play in Cowboys vs Eagles Game?

Dak Prescott has never missed a single NFL game ever since he joined the league in 2016 and he will most likely try to continue that streak. The Cowboys quarterback has thrown for 4,334 yards and 26 touchdowns and currently leads one of the best offenses in 2019 NFL season. In the last Eagles vs Cowboys game that happened in Week 7, Dallas won over Philadelphia by 37-10 and Prescott completed 21 of 27 passes for 239 yards, with one touchdown and an interception.

#Cowboys QB Dak Prescott doing a lot of standing and watching out at practice during media avail. Threw 1 soft pass in the pat-and-go drills. Mostly stood around w ball in his hand. A team source tells me they aren’t concerned about the right shoulder. Instead says it’s “sore” pic.twitter.com/RZytkOCf4N

The Cowboys will need Dak Prescott to repeat the same and without him, it would be much harder to beat the Eagles. Even though Prescott played most of the last game with a shoulder injury, the Cowboys defeated the Rams 44-21 as he posted his second-highest passer rating (123.8) in NFL 2019 season. 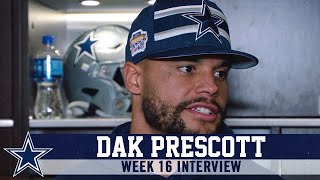