Captain Marvel’s ending has given a lot of explanation for many past events in MCU and also sets many future adventures. The movie is set in 1995, where Brie Larson plays the role of Carol Danvers.

She is a Kree Satrforce member named, Vers who accidentally drops into Earth and discovers her past life there.

She meets Nick Fury (Samuel L. Jackson) who helps her to track down her past life and question her identity as a warrior in the Kree-Skrull war. The Skrulls are alien shape shifters.

Many revelations are made towards Captain Marvel’s ending. Carol finally learns about her mentor, Dr. Wendy Lawson and why she sees her as the Supreme Intelligence. She learns about her abilities and how she gained them. She gained them after an engine fuelled by the Tesseract exploded and she absorbed it.

It was actually her mentor Yon-Rugg (Jude Law) who took her from earth to turn her into a super weapon. He wanted to use her in the fight against the Skrulls. Yon-Rugg took her to his home planet Hala and manipulated her memories.

Soon, Carol learns that the Skrulls are not evil and they are just looking for a home. On earth, she learns that her previous mentor, Dr Lawson was also a Kree scientist named, Mar-Vell. And she was helping the Skrulls in their pursuit of a home. Hence, Carol decides to do the same.

Yon-Rogg finds out about Carol’s plans and brings his army to earth in order to destroy her. He also asks Ronan the Accuser to come to Earth. In that fight, Captain Marvel finally discovers the true force of her powers and defeats the Kree team single handily. She also forces Ronan to return to Hala. She sends back Yon-Rogg in a spaceship too. So, let’s discuss what happens after Captain Marvel’s ending.

Carol realizes that the Skrulls are not evil. They were forced into the war by the Kree, who destroyed their home. She decides to help their leader Talos to find Mar-Vell’s cloaked laboratory. She soon discovers that the lab has served as a home to the other Skrull families. Maria Rambeau and Nick Fury help Captain Marvel to get the Skrulls out of the laboratory.

After the safety of the Skrulls were ensured, Talos must figure out what is next for them. Some of  Skrulls were living in Torfa, but there are hundreds of other Skrulls hiding within the galaxy. Carol agrees to carry forward her mentor’s work and help the Skrulls find a new home.

Captain Marvel’s ending also ensures that Kree’s plans were completely destroyed. They were hoping to turn Captain Marvel into a weapon for their benefit. Instead, she turned against them. Ronan and his team of Accusers were threatened to return to Hala but he promised to take Carol back one day. Yon-Rogg was also sent back to Hala with a message from Captain Marvel. Hence, Starforce is in a bad shape.

Read more:  How is Avengers Endgame connected to Spiderman Far From Home? Will Iron Man be a part of the movie?

A back story to Captain Marvel’s ending

For the MCU, the story of Kree after Captain Marvel is not brought in again till Guardians of the Galaxy. 19 years later, we learn that the Kree have signed a peace treaty with the Nova empire. However, not all members of the race accepted this treaty and Ronan became a radical of the empire. Korath also joins Ronan is his quest.

In Captain Marvel’s ending, Carol sends a message through Yon-Rogg that she will return to Hala to put an end to this war. But, there is still no clear green signal as to her future plans as of now. 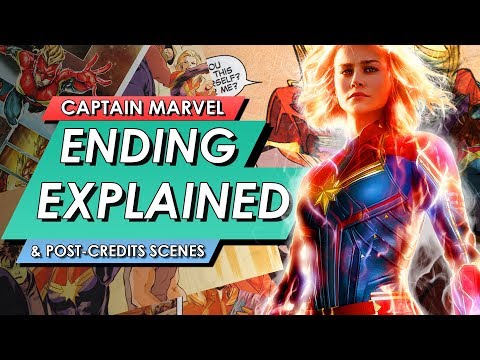