Cleveland Browns will finally get a shot at redemption in the Week 2 to prove themselves. The Browns will take on the New York Jets in the only NFL game of Monday night football. Both the teams lost their season opener despite having a deep and solid roster. While the Jets lost just by one point to the Buffalo Bills at 16-17, Browns were a disaster losing by 30 points against the Titans at 13-43.

Baker Mayfield and Odell Beckham Jr. kind of disappointed in the Week 1 game but they are ready to make comeback. The Jets will also have huge expectation from Le’Veon Bell and Sam Darnold and hopefully, they will deliver. Here are the predictions for the Browns vs. Jets game and ways to live stream it online.

Cleveland Browns are clearly a favorite in terms of NFL betting odds against the New York Jets. The Browns entered the 2019 NFL season favorites to win the AFC North and had even dreams for the Super Bowl. Titans vs Cleveland Browns was kind of a disaster where the offensive tackles couldn’t save Baker Mayfield at all and the QB was injured.

But the Jets are even worse as they had a 16-0 lead in the first half of the game and still lost to the Bills. The offensive side of Jets is nothing without Sam Darnold who got injured in the first game and have no chances of recovering soon.

Cleveland Browns vs. New York Jets game will start on Monday, September 16 at 8:15 pm EST. The only game on Monday of Week 2 will be played at MetLife Stadium in East Rutherford of New Jersey. Since the NFL game will be played on Monday night, it will be streamed exclusively on the ESPN sports network.

So on Monday night …

No Darnold. No Enunwa. No Herndon. Bell a question mark. O-line shaky.

Gregg Williams' defense will have to play out of its mind vs. Browns. #Jets

One can use any of the streaming services or devices and have a subscription to the ESPN Sports package. Hulu Live TV, Sling Orange, PlayStation Vue, fubo TV DirecTV Now, etc are some of the best options to live stream Browns vs Jets NFL game. 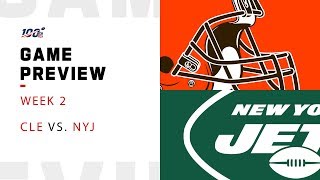