Tiger Woods is losing his charm day by day and he doesn’t have much time left in his golf career. The 43-year-old player is currently in Portrush, Northern Ireland to take part in the British Open 2019. The last title Woods won in the British Open was in the year 2006 and it has been 13 years. Woods is old, has gotten slow, can’t swing the same way as before.

Most of the Golf experts are saying that it is time Woods should retire for good. They are focusing on the fact that Tiger Woods is not in his prime anymore. Here is how Woods spent his day of the practice session and the troubles he is having in the golf games.

Practice Session in the Rain

As in the first day of the practice session, Tiger Woods reached the Dunluce Course at Royal Portrush at sharp 3 pm local time. The game of golf starts at the same time and hence Woods wanted to have a grab at the atmosphere at that moment. But the afternoon turned grey quickly with some of the heaviest rain the place has seen.

Read more:  British Open 2019: Tiger Woods Not Confident of Him Winning This Time 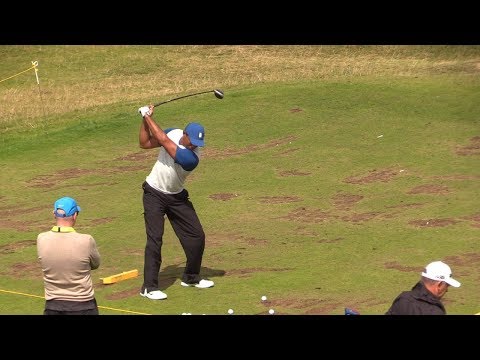 It didn’t stop Woods from stepping out of the golf cart and he spent a full 55 minutes in practice session. He made a series of short and long puts and made sure the golf ball reaches the little green area. Woods refused to wear any raincoat and was fully drenched in the water near to the end. He then made his way back in the golf cart and threw some balls near the crowd to gift it as a souvenir.

Struggling with the Golf Ball

The reason why Tiger Woods is practicing so hard is because he has lost his touch in the game. He said that he is not as sharp as he was before and work is being done on that. In the last few games, Woods is unable to shape the golf ball properly.

Birdie at the first.@TigerWoods ignites the crowd at Royal Portrush with this putt.pic.twitter.com/4Y98DNhixc

The special touch and making the ball reach the green spot is very difficult. The weather will be very harsh in Ireland and wind force and direction have to be calculated while taking a shot. Tiger thinks that the golf course is a bit tricky and he will try his best to make a game on point.