Despite the “Put It To The People’ march and an online petition that garnered over 5 million signatures, the Government has rejected Revoke Article 50 Petition.

Although the petition will be discussed by MPs on April 1, having crossed the 100,000 threshold long ago, it will not be accepted in the Parliament.

At the time of reporting, the appeal gained over 5.75 million signatures and is the most popular online protest in the history of the UK. The petition asks the Government to remain in the EU and rejects the claim that Brexit is the ‘will of the people’.

Time and time again, the Government has responded negatively to demands of rejecting the 2016 referendum. A response was posted by the Government on the official parliamentary petitions website that read,

“This Government will not revoke Article 50”.

It was also mentioned that the Parliament will work hard to devise a plan that will be advantageous to all sections of the British population, whether they voted to Remain or Leave.

“Revoking Article 50, and thereby remaining in the European Union, would undermine both our democracy and the trust that millions of voters have placed in Government,” the response read. 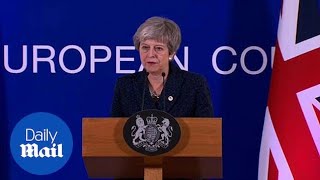 However, the Government did nod in the direction of those who signed the petition. But it seems unlikely that the petition’s demands will be met since more than 75 per cent of the British population voted to leave the EU.

“This Government wrote to every household prior to the referendum, promising that the outcome of the referendum would be implemented,” the report read.

Over 17 million people voted to leave the EU in the 2016 referendum. The report called it “biggest democratic mandate for any course of action ever directed at the UK Government.”

Prime minister Theresa May has previously made similar statements. She said that if the Government fails to oblige to the results of the referendum, it can lead to ‘potentially irreparable damage to public trust’.

The petition will be debated by MPs in the Commons’ secondary hall on April 1st.