Black Mirror Season 5 is about to release soon and the fans can’t keep their excitement. Here’s everything that you need to know about its cast, release date, plot and other details.

When will you get to see Black Mirror Season 5?

Black Mirror: Bandersnatch came out in December last year. It was the first-ever interactive episode of the show. Netflix has not said anything about the release date of the Black Mirror Season 5 yet, but a movie is on its way and will be out soon.

How many episodes will Black Mirror Season 5 consist of?

An announcement was made by Netflix in a release,

Patience is a virtue, but rest easy knowing there is more Black Mirror on the way.

Creator Charlie Brooker also gave hints regarding the renewal of the show.

Who will be in the cast of Season 5?

Black Mirror is made of standalone episodes with each episode consisting of a different cast.

In the previous episodes, the audience saw Doctor Who star Jodie Whittaker, Bryce Dallas Howard,  Jon Hamm, Jesse Plemons, and Rupert Everett. Apart from them, we even saw Domhnall Gleeson and Daniel Kaluuya. There are rumors that Miley Cyrus would be joining the show for the fifth season.

Where is Season 5 of Black Mirror filmed?

Black Mirror was majorly filmed in Croydon, South London. So the fifth season is also likely to be shot in the same place. 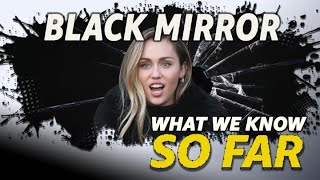 However, there has been wide variation in the locations where Black Mirror has been shot. So there is a possibility that the fans may get to see a different location for Season 5.