Black Clover Chapter 240 will show the aftermath of Zenon destroying the Golden Dawn warriors and almost killing Yuno. There will be a delay of one week in the next Black Clover manga installment and the series will resume from this weekend. Zenon defeated William Vangeance and took control of the Arcane Stage mage and everyone who opposed the villain was killed or injured.

Black Clover Chapter 240 plot spoilers indicate that Yuno will be healed back to life by the magical Yggdrasil tree. Yuno along with Letoile and Klaus tried to stop Zenon but the villain was too powerful and even the ‘Spirit of Zephyr’ attack couldn’t defeat him. Zenon mocked the Golden Dawn warriors as he defeated all of them including Yuno and called them weak.

Asta will see the fate of Yuno and other heroes in Black Clover 240 and he will be devastated to see his friends killed by the enemy. The hero will try to take revenge against Zenon and challenge him for a fight, but things will get harder as the Dark Triads will also arrive looking for Captain Yami of the Black Bulls. Fans can finally see Asta fighting in full glory in “Black Clover” Chapter 240 as he takes on Zenon and the Dark Triads alone.

Black Clover Chapter 240 will release on Friday, February 21, 2020, as per VIZ’s official website. The raw scans for Black Clover 240 manga chapter will be out 2-3 days prior on the internet around February 19 but it would be better to wait for the official release.

Black Clover, Ch. 239: The battle takes a heavy toll on some of the brave warriors! Read it FREE from the official source! https://t.co/fYLG69h61u pic.twitter.com/eD5b49LeTX 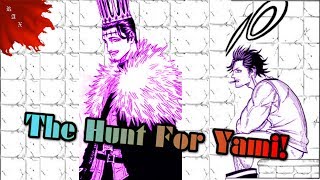