Bears vs Redskins Monday night football game was another disaster for the men in Red as they are still without a single victory in the 2019 NFL season. The Redskins after a promising start went downward and are currently 0-3 in the NFC division table. Fans have started comparing Washington Redskins with the Miami Dolphins are honestly there is not much difference between them. Here is what went in the last night game when the Redskins were badly defeated by the Chicago Bears.

Are the Bears good or the Redskins bad?

The Washington Redskins have to offer in their offensive line as without Derrius Guice the running game was just 69 yards for 21 carries. The offensive line was totally useless and couldn’t protect Case Keenum and he had three interceptions by the defensive side of the Bears. The only good thing about Bears vs Redskins game for the Washington team was rookie Terry McLaurin making five receptions and a touchdown.

The home team was booed off the field.

Chicago Bears had a Complete Game

Chicago Bears were under pressure to take a lead in the 2019 NFL season as they had to keep the pace in NFC North division. The Bears made every effort and finally got to 2-1 and are in the same line as Lions and Vikings. Taylor Gabriel made three touchdowns against the weak defense of Redskins and secured the victory for his team. The Bears knew the game depended on their defense and it was superior and easily pushed the offensive line of the Redskins.

The Redskins dumped Ha Ha Clinton-Dix to bring in Landon Collins for $84 million.

The #Bears then signed Clinton-Dix for $3 million.

The Redskins have to Replace Peterson and Haskins

The Redskins have to make a tough decision and bench or replace the players which are not performing. Washington coach Jay Gruden has made up his mind and will replace the veteran running back Adrian Peterson who played his worst inning in the game against the Bears. Dwayne Haskins is also useless as the back quarterback to Case Keenum and the Bears defense would have eaten him alive in the Monday night game. 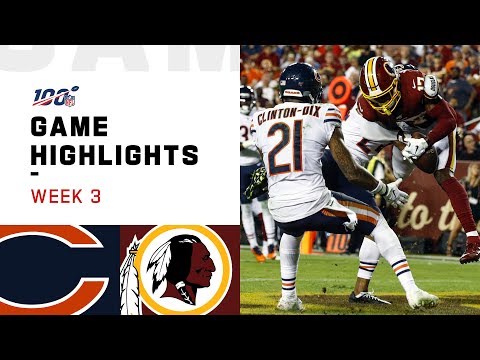