Arrow Season finale was amazing and it wrapped most of the story arcs and opened up a lot of new possibilities for the other characters. It finally did something for which fans were waiting since the first season and teased that John Diggle (David Ramsey) will finally become a Green Lantern in the future. There have been numerous theories and easter eggs throughout the CW’s Arrow series that John Diggle is, in fact, John Stewart who is a prominent member of the Green Lantern corps.

Will David Ramsey be a part of HBO Green Lantern Series?

David Ramsey, when asked about his future, hinted that there is a possibility that he might stick around as Green Lantern. There is a lot of discussion about David’s future in the Arrowverse both onscreen and offscreen and with HBO Max taking over, they might integrate everything into the same multiverse.

"In brightest day, in blackest night, No evil shall escape my sight. Let those who worship evil's might, Beware my power…Green Lantern's light!"#Arrowverse#ArrowSeriesFinale pic.twitter.com/XEh0Q0wzrO

The CW’s big crossover event, ‘Crisis on Infinite Earths’ has established that every DC superhero exists in the same multiverse and many of them are now combined together into the same earth. Metropolis exists on the same earth as Star City now and it is why John Diggle finding a green lighting box can set him up as the future Green Lantern for the upcoming HBO Max series.

Arrowverse on CW is not allowed to use certain characters and it is why they have never shown Batman, but it has been changing with time. They have shown 2 Flash, 3 Superman and a lot more of the multiple characters. It won’t be a surprise if they can show David Ramsey’s John Diggle as a Green Lantern on some parallel earth in regards to the new Green Lantern TV series.

Fans are hoping that Ramsey portrays the iconic character of John Stewart in the HBO series as it will have two Green Lanterns and he can be one of them. CW might get the rights to have Green Lantern soon, and then David Ramsey can play the new version of John Diggle Lantern. 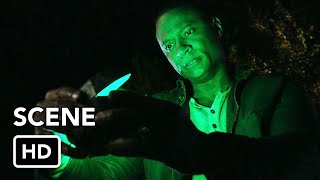