Apple is coming up with the new over-ear AirPods which are also rumored to named AirPods X Generation. The new over-ear AirPods are built for those gamers and music lovers who prefer sound quantity over portability. The Cupertino based tech giant has lined up a lot of other new products and the over-ear AirPods could be a show-stealer. Apple is planning to launch the Over-Ear AirPods X at the upcoming WWDC 2020 event and here are more details on the specs and features of the wireless headphones.

AirPods Pro is the latest model from the company which was released last year and ever since then, there have been rumors that Apple is working on a new version of the AirPods. Jon Prosser, the popular Apple analyst and leaker have suggested that a new MacBook Pro, Air Tags and over-ear headphones will be revealed at the next WWDC.

While the branding of the headphones was not mentioned, there is no way Apple would give space to Powerbeats at the WWDC 2020 headlines. It has to be a new type of over-ear AirPods which has also been mentioned in some previous leaks. There have been leaked reports that Apple AirPods X Generation where seen in the retail inventory stories. The AirPods X were priced at $399 with three color variants hinting the possibility of the over-ear AirPods model. It is also rumored that the over-ear AirPods will have active noise cancellation feature which is exclusive to the AirPods Pro devices.

Apple was planning to launch all the new products including the iPhone SE 2 at the March event but it has been canceled over the Coronavirus pandemic. The COVID-19 outbreak has delayed or postponed major tech events and Apple also decided to launch several products with a simple website refresh. But WWDC 2020 will happen in June as per the schedule, only it has been changed to an online event and the over-ear AirPods X could be launched in the first week of June 2020. 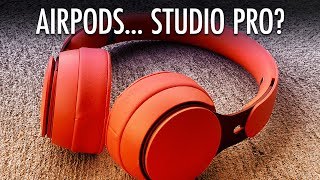