Apple Music vs Spotify rivalry is heating up with the 2019 year coming to an end. Both the music streaming service giants are offering users songs from their favorite singers and albums on iPhones, Android phones, Amazon Echo Smart Speakers, Smart TVs and more devices. Apple and Spotify are trying to capture the market and want to become the provided for Christmas playlist and hence coming up with new things.

To stay relevant in the streaming music war, Apple has come up with Music Replay features, which is more or less inspired by Spotify’s Year Wrapped playlist. The ultimate move is the introduction of the Music Awards show, which makes Apple Music vs Spotify more interesting.

Apple Music is offering the replay playlist where it creates a song collection based on the tracks you have played the maximum number of times in the last twelve months. It will also include playlists for the year 2018, 2017 and even 2016 while including last year’s Christmas songs too.

It's the most wonderful time of the year. #SpotifyWrapped is here! Get yours. https://t.co/MUJHwP1iK3 pic.twitter.com/4X92B9rvPM

Spotify has made an entirely separate website on Year Wrapped which provides you the annual statistics of your music library. It gives the number of minutes or hours listened to a single track or artist and other such information. Everyone Spotify user has been sharing their top songs and artists from the 2019 year wrapped on Twitter and it has made it more popular than Apple music service.

Apple has started the Apple Music Awards for the first time, which will take place in the Steve Jobs Theatre at its headquarters in Cupertino, California. Billie Eilish will be awarded as the Artist of the year and she will also perform at the event. The other artists to receive Apple Music Award include Lizzo as Breakthrough Artist of the Year and Lil Nas X for Song of the Year award (Old Town Road).

Behold the Apple Music Award: Built from the same laser-cut silicon wafers that power Apple's microprocessors, it's a unique token of appreciation for the artists whose work upended convention and dominated the conversation all year. #AppleMusicAwards2019https://t.co/9OZK3rOkcS pic.twitter.com/qQ2bwq0r1z

Spotify has also announced its own Music Award show where instead of judges, streaming data from users will be used as the parameters to decide the winners. The Spotify awards show will take place in March 2020 in Mexico City. 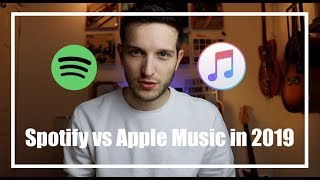