Apple iPhone 9 or iPhone SE 2 will be unveiled soon and all the tech fans are very excited about the launch of the budget smartphone. While the Cupertino based tech giant is coming with the high-end iPhone 12 series later this year, everyone is looking forward to the mid-range follow up of iPhone SE that was released in 2016.

Leaked: New reports suggest that iPhone SE 2 – or ‘iPhone 9’ – could be coming as soon as March. Mass-production is allegedly set to begin in February. pic.twitter.com/SCwAvguB0h

Apple is rumoured to begin production of the iPhone 9 in February and could launch it in most markets by March 2020.
The iPhone 9 is expected to be a successor to the old iPhone SE.
It’s gonna be like iPhone 8 but have the iPhone 11 spec. pic.twitter.com/YbvAEycU25

It was earlier rumored to named iPhone SE 2 and now some of the reports are calling it iPhone 9. Whatever the name is, there are several renders of the Apple device leaked on the internet and it shows that the home button is coming back and the iPhone 9/SE 2 will be available in three different color variants.

Apple iPhone 9 or iPhone SE 2 as the Official Name?

Apple coming out with a budget smartphone was directly linked with the iPhone SE model and hence everyone started calling it as iPhone SE 2 initially. But with time more leaks and specs started to leak about the device and it seems, it would be accurate to call it as Apple iPhone 9. The reason being that iPhone SE 2 should have a 4-inch body like the previous iPhone SE, but the form factor of this upcoming model is more similar to iPhone 8 with a 4.7-inch body, hence the name iPhone 9.

Also, the upcoming iPhone has rounded edges instead of a sharp body and apart from a cheaper price, nothing is that similar to the iPhone SE series. Hence, most of the tech experts have now decided to call it as Apple iPhone 9, instead of iPhone SE 2 until Apple reveals the title officially.

Apple iPhone 9 is rumored to release in March and hence with the launch window getting shorter, a lot of renders are showing up on the internet. One of the leaked iPhone 9 render set images hints that the home button is coming back for this budget Apple device. It is also rumored that iPhone 9 (iPhone SE 2) will come in three color variants namely red, black, and white shades. 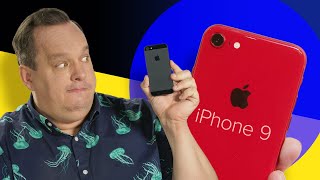