Apple iPhone 12 is coming out this year and until the company unveils official specs, various concept models of the next iPhone are surfacing on the internet. There is a new iPhone 12 concept video created by Technizo Concept and posted on YouTube by the ConceptsiPhone channel which is gaining every smartphone user’s attention.

While the amazing specs and features are shown in the concept iPhone 12 video might not be a reality, Apple users are wishing that the future models implement some of the things. Here are more details on the Apple iPhone 12 concept features, specs and the comparison with the actual iPhone 12.

The new concept video shows iPhone 12 with bezel-less display and there’s no notch on top and the bottom bezel is also very slim. But the best part about the device screen is that the display overflows to the side. Apple iPhone 12 concept is a smartphone whose side displays also acts as a screen capable of showing app icons, notifications and other features.

There is a huge camera module on the backside of the iPhone 12 concept device which houses a 6-camera setup. Apple iPhone 12 rear camera setup includes a periscope-style camera with optical zoom capabilities, a Time of Flight (ToF) sensor and a multi-LED flash. The camera style of the concept iPhone 12 almost looks similar to the recently launched Samsung Galaxy S20 Ultra.

The best part about the iPhone 12 concept video is that it shows that the Apple device is capable of projecting 3D hologram images from the top. It can create a 3D image of any picture on the iPhone and then project it as a hologram. The projector in the concept iPhone 12 is housed behind a small display that shows the time and other icons.

Apple iPhone 12 features and specs won’t be such advanced as shown in the concept video but it opens up the possibilities. There are rumors that the Cupertino based tech giant is working on holograms on iPhone along with side-screen displays. While the features shown in the concept iPhone 12 video might not be a reality in 2020, Apple can include some of those in the future iPhones. 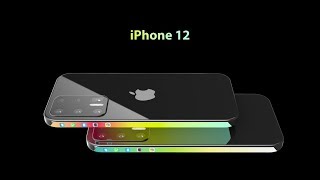