Apple iPad Pro 2020 is coming this year and the company is making sure that it stands out from other tablets. There are reports that the Cupertino based tech giant has developed a new Smart Keyboard with a built-in trackpad that will come along with the upcoming model of iPad Pro.

Apple is releasing an iPad Pro keyboard with a trackpad later in 2020. pic.twitter.com/eMGLfLMgn5

Apple plans to mass-produce the smart keyboard accessory so that it can be used with other devices too. Also, the 2020 iPad Pro and the smart keyboard will use the same materials and feature a lot of fabric. Here are more details on the Apple iPad Pro 2020 release date, price, specs, features along with the trackpad enabled smart keyboard.

Apple iPad Pro 2020 will come up with Smart Keyboard

Apple has always been working on smart keyboards that can be used with all the models of iPad and makes the user experience better. The smart keyboard prototype reveals a design that uses capacitive keys to mimic the responses of a mechanical keyboard by using sensors. The 2020 iPad Pro smart keyboard will also feature a “glowing scissor switch” technology that features backlighting and is useful to work late in the evening.

The trackpad-equipped Smart Keyboard could be launched together with the upcoming model of iPad Pro which is also called iPad Pro 2020 at the moment. Apple plans to make the upcoming iPad Pro as the alternative to MacBooks for those who prefer light handheld tablets that also work as laptops.

Apple is planning a big launch event in March 2020 where it would release the rumored iPad Pro 2020 along with iPhone SE 2/iPhone 9, AirPods X and a few more products. The upcoming 2020 iPad Pro will feature a lot of upgrades including the triple rear camera setup similar to the iPhone 11 Pro lineup and A14 bionic chip. It is why Apple iPad Pro 2020 will be very costly and it could easily start at the price of $999 or more. 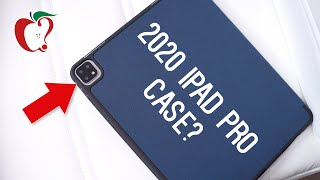