Apple iOS 14 will bring all sort of new features and additional support for services which were not available in the previous software updates. It is reported that iPhones and iPads will receive much better and improved mouse support in the upcoming iOS 14 software.

While Apple has already introduced mouse support for iPhones in iOS 13 and iPads in iPadOS as an additional feature, it will become mainstream once iOS 14 releases in the market. Apart from that, iOS 14 will also support the new Smart Keyboard with Trackpad that will be introduced alongside the rumored 2020 iPad Pro.

Apple iOS 14 will have Mouse Support

Apple iOS 14 update will make using the mouse on iPhone and iPad similar to MacBooks as per the iOS 14 source code revealed. It will be useful for a lot of Apple users, especially those who use their iPads and laptops and work the whole day. The reported changes include different kinds of mouse pointers depending on the position, as a standard pointer for normal screen and switching to a hand pointer when the arrow is hovering over a clickable link.

According to 9to5Mac, based on leaked iOS 14 code, iPadOS 14 will include more advanced mouse cursor support including multiple pointers and right-click. pic.twitter.com/EcPyoFYOmR

Real mouse support on iOS 14 suddenly makes external display support a lot more interesting. Before, there was just no way to interact with an external display, but now that you have a mouse cursor, why wouldn't you want to let it span displays? Could be transformational

Also, the iOS 14 feature will also include the mouse pointer disappear when the mouse is not used for a certain amount of time. It makes sense while reading something or watching movies and Apple iOS 14 will make sure to consider the iPhone and iPad as a touch-enabled device.

Apple iOS 14 will also bring support for the upcoming Smart Keyboard that contains a trackpad in the middle. It means that Apple users can now use the trackpad on iPhone and iPad similar to how they use on any laptop. There will be several gestures such as right-clicking using a two-finger tap, a three-fingered swipe to show all apps, and more. The Cupertino based tech giant will launch iOS 14 update at the WWDC 2020 event and it will be fully released alongside iPhone 12 in the annual Apple September event. 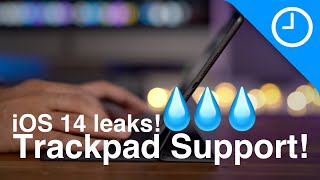