Apple is yet to unveil the next iteration of its iOS 13 update but the Apple blogosphere is already on fire with daily leaks, renders, and updates.

The last update from iOS 11 to iOS 12 was not a major update in the sense of UI. However, things are a report from BGR suggests that the iOS 13 update will bring major revamps to the UI.

Apple is yet to unveil the iOS 13 update but this cannot stop the people from putting out their own take on the mobile OS. We have seen a lot of renders and concept videos of the iOS 13. Let’s take a look at some of these.

The latest render by graphic designer and blogger Nicholas Ghigo showcases his take on the upcoming iOS 13. He released a video that shows the possible implementation of iOS 13 update on iPhone  11. 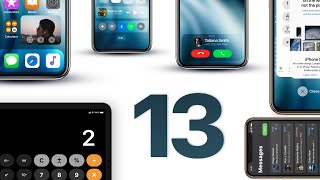 The video shows us a redesigned message center and control panel which is awesome but it is highly unlikely that this will make its way to the update.

The render also shows a quick access menu for the most used emojis at the bottom of the keyboard which could help the users in faster typing while sending a message.

We also get a look at the graphical improvement makes the iOS 13 update an eye candy. The video gives a sneak peek into the possible dark mode which has been rumored for months.

The render also showcases some features that look straight out of Android like the new volume panel which is moved to the side of the screen.

The video also teases with the addition of picture-in-picture mode which allows the users to watch videos on other apps. We also get a look at the multiuser account implementation in the iPad.

All in all, there is a lot to take from the video but it is less likely that most of the features will not be on iOS 13 update.