Apple AirPods 2 vs Powerbeats Pro is a comparison that was bound to happen sooner or later. While both the wireless earbuds come from the same parent company, there are more differences than one would’ve imagined otherwise.

Apple’s AirPods are now in their second generation, they haven’t changed much from when they debuted in terms of design but now comes with the new and improved interior.

Beats on the other hand(Owned by Apple) also unveiled a wireless earbud, Powerbeats Pro, They announcement was made just a few weeks after Apple revealed the AirPods 2.

Both these products come with some identical specs, some noticeable difference and one is more expensive than the other. But which one offers extra features that make it merit the price? AirPods 2 or Powerbeats Pro? Find out in this comparison of ours.

Both the earbuds are truly wireless in nature. The Powerbeats Pro and AirPods 2 are Bluetooth earbuds with best in store hardware.

They both are shipped with their own set of charging cases, these cases also bundle up as the only way to juice them up.

Both the wireless buds come with Apples own H1 headphone chip inside of them. The Powerbeats Pro and AirPods 2 are both powered by the same chip. The ability to use various “Hey Siri” commands is also present in these two earbuds.

Another similarity among these buds is that you can interact with the earbuds, you can control the music playback.

As soon as you plug the buds out of your ears the music will stop playing itself music automatically.

Even though both these earbuds are from the same company and are identical in many perspectives the same can’t be said with respect to the design of either.

Apple AirPods 2 just like the first-generation AirPods, come with no design alterations. they are made from a shiny white plastic material and comes with a sleek design which can fit in a variety of ears.

Powerbeats Pro, on the other hand, is meant for athletes and fitness freaks they are equipped with water and sweat resistant, unlike the AirPods 2.

The Powerbeats Pro offer noise isolation unlike the AirPods. The beats Pro gives relatively better sound quality than the Air buds. These buds will give you an isolated audio experience with a wider dynamic range. AirPods on the flip offer decent bass but lacks in overall sound quality.

Pricing wise the AirPods 2 are cheaper than Powerbeats it is priced at $159(base variant) there’s also a model with wireless charging case priced at $199. whereas, The Powerbeats Pro goes for $249.99.

Both the earbuds come with some tantamount specs but the Powerbeats Pro wins the battle with a slight margin due to its longer battery life, high-grade audio output, and water & dust resistant treatment.

If you’re tight on a budget and want more or less a similar experience AirPods 2 won’t disappoint you. 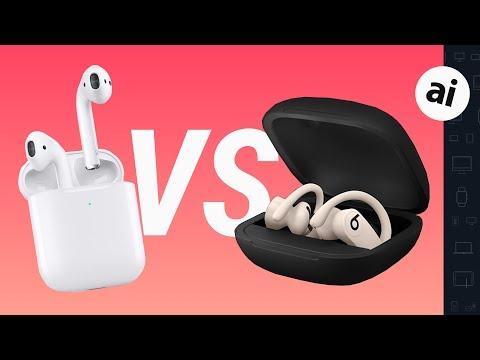