The Hadids’ mother, Yolanda, was also a model, and she taught her children to work hard. Bella and Gigi Hadid are two of the most well-known supermodels in the world because of this. But they are successful because their mother taught them how to work hard.

Yolanda has been criticized many times over the course of her career for how she raised her daughters and how she handled their upbringing. One of the many things that people have said about her is that she is a “toxic parent.”

Everyone knows that Yolanda had strict rules for her daughters, Gigi and Bella when they were growing up. This is especially true considering how much attention their lives got as they got older.

Here are 7 rules that Yolanda Hadid made sure Bella and Gigi Hadid followed very strictly.

She didn’t let Bella and Gigi model until they were 18 years old.

In an interview with Elle magazine, Yolanda said that she didn’t give her daughters permission to become models until they were 18 years old.

“I didn’t want anybody judging them on what they looked like. I wanted them to feel and be the authentic human beings that they are, and I think that created a lot of strength for them,” she told Elle.

Even though Gigi modeled for Guess when she was only 2 years old in 1997, she stopped modeling while she was in school and didn’t start up again until she was 18 years old in 2011.

Yolanda was worried that Gigi would look “bulky” and not very attractive if she played volleyball.

A clip from “The Real Housewives of Beverly Hills” that was recently found again shows Gigi and Yolanda talking about how Gigi wants to get back to playing volleyball with her club team. The Daily Mail said that the clip was found.

In response, her mother said that she was worried that Gigi’s participation in the sport would make her look too “bulky,” which would hurt her career as a runway model. 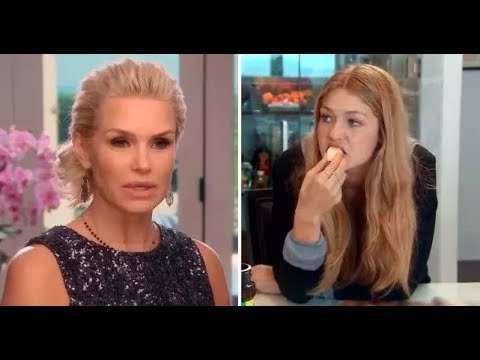 “She’s gotta start building her career and that means sometimes we have to give up the things that we love to do,” Yolanda explains in a confessional.

“These girls they train four hours a day after school so their bodies are big and bulky. I mean, they eat like men. I wanted her to develop as a woman.”

She wants her daughters to be safe while they are growing up.

Yolanda has said that she wants Bella and Gigi to have a normal, everyday life, even though they are famous and wealthy. During an interview with People, she said this.

“My biggest job is how am I going to keep them emotionally stable,” she said.

“We have a farm outside of New York. We ride horses, we have a vegetable garden. I bring them to the farm and remind them of who they are and how they were raised. It’s about going back to our roots and recharging.”

Yolanda didn’t just praise Gigi and Bella for how they looked when she did this.

In an interview with Elle, Yolanda told Elle about this. She said that instead of complimenting Gigi and Bella on their looks, she wanted them to focus on how they felt about themselves and how they treated other people.

“I always said to them, listen, there are thousands of girls that are much more beautiful than you girls, but you have an extraordinary character, and you’re going to have to set yourself apart by being a role model, by showing up on time and being kind to everybody,” she said.

“To the light people, the make-up, the cleaner in the back of the studio. Those are the people that you have to connect with, and that’s how you can make a difference in the world.”

She hopes that Bella and Gigi will use their fame for the good of society as a whole.

Yolanda told People that it was important for her daughters to know that their large platforms gave them the chance to talk to people in many different ways.

“I ask my kids every day, ‘God has provided you with this platform, what are you going to do with it?’” Yolanda told People. “It’s not about posting pretty selfies. I want them to be good human beings who can make changes in the world.”

Yolanda also talked about how the rise of social media has changed the modeling business.

“When I was modeling we had no voice. We were just a pretty face. In today’s world, that has completely changed. You have a platform. It’s your responsibility to live a conscientious life, and to be a role model, and if you can’t be that, then you shouldn’t be in the business.”

Read more:  Julia Roberts Took a 20-Year Hiatus from Acting to Devote Herself to Family, and She’s Revealing Her Strict Parenting Style

Yolanda thought it was very important for both Bella and Gigi to have a sense of respect.

“Respect is number one,” Yolanda told People, adding that she didn’t stand for diva-like behavior.

“When my girls started, I sat them down and I said, ‘Listen, there are a million girls out there who are as beautiful as you and deserve success as much as you do. You have to be the hardest working girl and show people you care about everybody.’ ”

“It’s a superficial business. At the end of the day, looks will come and go. And what makes me proud of my children, more so than even their success, is that they are polite and respectful.”

Even though their schedules are busy, Yolanda makes it a priority to spend time with her family.

“There’s nothing greater for a mom to see your children succeed in something they really love to do,” Yolanda gushed.

Yolanda makes it a priority for her family to spend quality time together, even though Gigi and Bella have very busy schedules when they travel.

“Whether it’s in the middle of the night, after a job, before work — we make the commitment to be together as much as we can.”