Winds of Winter book is still not out and the fans have been waiting for since the last nine years. The last book in the series “A Dance with the Dragons” came out in 2011 and there is no new book released in the ASOIAF series after that. George RR Martin has made several promises about the Winds of Winter release date but none of them has proven true.

While we are all cooped up inside our homes for the time being, now would be a good time for George RR Martin to release “Winds of Winter”…… I’m just sayin’.

The sixth installment of “A Song of Ice and Fire” series by GRRM is still not completed. There are high chances that the Coronavirus pandemic will affect the launch of The Winds of Winter as George RR Martin has given mixed updates on The Winds of Winter book launch.

George RR Martin on The Winds of Winter Updates

George RR Martin promised that he will have Winds of Winter in his hands when he comes to the Worldcon 2020 event in New Zealand this year. The 71-year-old author wrote on his blog that fans could lock him in a small cabin on White Island until he is not done with the book. But the problem is that Martin won’t travel to New Zealand now due to the Covid-19 pandemic.

April is here, though up where I am there is still a lot more snow than flowers. The weirdness continues, all around the world.  Sometimes it is hard to recall how much has changed in just one month… https://t.co/ri22d4JrQX

The annual World Science Fiction Convention (CoNZealand) has been canceled due to the fear of Coronavirus outbreak. The Worldcon will be now a virtual event and George RR Martin will attend it via live stream. The only silver lining is that George will get more time to write The Winds of Winter chapters as he is under self-isolation.

GRRM is not Close to Finish Winds of Winter

The Winds of Winter is not close to finishing despite several chapters of the books are released online. George RR Martin is suggesting his fans to read Fire & Blood and A Knight of the Seven Kingdoms in the meantime to pass the days. The author is also suggesting dozens of other books to the readers hinting that TWOW is nowhere close to ready. George might be getting more time to write “The Winds of Winter” but that doesn’t mean the book will come out soon. 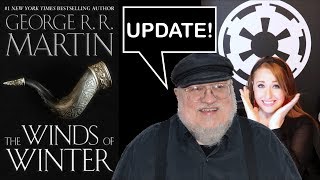