Game of Thrones Season 8 Episode 3 is all set to be the next episode in the epic fantasy show. Coming off the heels of Episodes 1 and 2, where there hasn't been much action, the third episode of GoT is all set to deliver all the action that the fans had been waiting for - as the teasers of the show have been indicating, the Night King has arrived.

Many people are wondering about how to watch GoT Season 8 Episode 3 online. Let us take a closer look at that, and about everything that we know about the episode so far:

How to Watch Game of Thrones Season 8 Episode 3 Online in the UK?

Those living in the UK can easily watch the latest episode of Game of Thrones Season 8 by using the Now TV Entertainment Pass! Priced in at just £7 a month, the pass allows you to watch all the episodes of GoT starting from Season 1 to the latest episode! In addition to that, you will also get popular channels such as Sky Atlantic, Comedy Central and more. This subscription can be cancelled any time and is free for the first two weeks!

Another way in which you can watch Game of Thrones episodes online in the UK is using the Sky Go app. It costs £25 per month. It allows you to watch all the previous seasons of the show as well as the latest episodes, along with 54 other live channels and 2000+ movies and TV shows.

How to Watch Game of Thrones Season 8 Episode 3 Online in the US?

HBO is the best way to watch GoT online in the US. Those wondering how to watch Game of Thrones Season 8 Episode 3 online should simply head to HBO either on their TV or check out the HBO NOW and HBO Go applications. In either of the three cases, you will need an HBO subscription to watch the show.

HBO subscription costs $14.99 for the basic plan (you can watch Game of Thrones online in this plan) and the price rises based on the package you choose. Viewers can also use the HBO add-on on their Amazon Prime Video account in order to watch the show.

How to Watch Game of Thrones in Other Countries?

If you are not based in the US or the UK, chances are that you have very limited options of watching Game of Thrones Season 8 Episode 3 online legally. The best way to do so will either be to check out local apps offering GoT streaming (such as Hotstar in India, Crave in Canada and Foxtel in Australia).

However, for those who do not have this option, you can set up a Virtual Private Network which tricks websites into believing you are from another country. You can set your location as UK or US in the VPN and get a subscription of the HBO or Sky apps to watch Game of Thrones online in your country. NordVPN, CyberGhost and PureVPN are among the three best VPN services you might want to try out.

What Time and Date Does GoT S8E3 Air?

Is Game of Thrones Available on Netflix?

Netflix competitor Amazon Prime Video actually has the show - but only if you purchase an HBO add-on. However, never say never when it comes to Netflix as the company might shell out millions of dollars to acquire GoT, one of the hottest properties when it comes to television content. We will update you if and when that happens.

Is it Safe to Download Game of Thrones Season 8 Episode 3 Torrent?

Another way to watch Game of Thrones Season 8 Episode 3 online is by downloading it from torrents. However, we strongly recommend that viewers do NOT do that. This is because first off, it is illegal to do so and if you are caught by the law enforcement authorities you might face strict punishment.

Moreover, downloading torrents of Game of Thrones can be risky for you because a number of hackers and scammers are merging the video files along with malware and ransomware which can result in your security being compromised and your data being stolen. Moreover, sometimes hackers encrypt all the files in your computer and you can no longer access them. You have to pay the hackers a certain amount to access your own files and in case of non-payment, these files will be deleted.

Promo for Season 8 Episode 3 of GoT

Those interested in watching Game of Thrones Season 8 Episode 3 online should also check out the promo for the show. This promo aired right after Episode 2 ended. It hypes up the audiences for what is to follow next.

In this promo, we see everyone getting battle-ready. Brienne of Tarth is leading the charge. Jon Snow says 'The Night King is Here'. A number of other major characters also appear briefly. The title and the synopsis of the episode are yet to be revealed by HBO. Here's the promo for GoT Season 8 Episode 3. 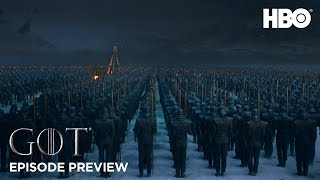