Venom 2 movie is under works and new details are getting leaked daily on the internet. Andy Serkis has been hired to direct the movie and Tom Hardy will be back to reprise his role as Eddie Brock who hosts an alien parasite named Venom.

There are several rumors that Sony is planning to use Spider-Man after their recent deal with Disney and the Morbius trailer kinds of confirms that. Since the first movie was a huge success, everyone has high hopes for Venom 2. Here is everything you need to know about Venom 2 trailer, release date, cast, cameos, plot spoilers and the rumored Spider-man vs Carnage fight.

Venom 2 trailer is rumored to come out in February by many of the reports meaning we can see the glimpses of the movie very soon. It makes sense given the release date of Venom sequel is not that far away. Venom 2 release date has already been announced as October 2, 2020, and the first teaser coming out 8 months prior to the movie premiere is a normal thing.

Real talk between friends – we both agreed we are looking forward to New Mutants & Morbius and Venom 2 over Black Widow. What gives???

Here are the confirmed list of actors that will appear in Venom 2 and some of them will reprising their roles from the first Venom movie.

Venom 2 could also have a lot of cameos if Sony is really planning to expand their movie universe and it would include characters from Spider-man to all their upcoming movies like Morbius and Black Cat. It means Tom Holland, Michael Keaton, Jared Leto, etc. could have a cameo in the Venom sequel.

Carnage is going to be a very important character in Venom 2 storyline and Andy Serkis has hinted that he has big plans for the symbiote. Woody Harrelson will play the red-colored symbiote also known as Carnage who is the exact opposite of Tom Hardy’s venom.

So who wants Venom and Spidey going up against Carnage in Venom 2? pic.twitter.com/jwZUVwBIEb

There are some leaks which mention that Carnage will be causing trouble in the city when Spider-man swoops in to save the day but the fight gets ugly. It is when Hardy’s Venom appears and breaks the Spider-man vs Carnage fight and saves Spidey and beat the evil alien. 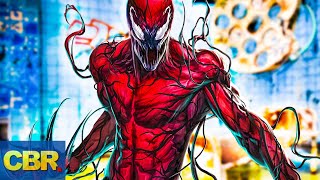