The creative duo of BoJack Horseman series, Kate Purdy and Raphael Bob-Waksberg are paired-up again for an upcoming Amazon show called as Undone.

The teaser of the animated series Undone is realized by Amazon recently. The teaser is clearly something the audience has never seen before on the Television.

The trip to Undone was announced last year by the creators. The story-line revolves around Rosa Salazar’s Alma. The trailer of Undone shows Alma surviving the fatal car accident at one point.

In the Undone trailer, fans observed something that could be like Alma’s classroom, at 21 seconds. Later, as the car was moving off toy blocks, a steering wheel abruptly appeared.

Haunted by the almost fatal car accident, Alma follows a near-death experience. Gaining a thorough experience of time, Alma’s skills are likely to solve the mystery behind her father’s death.

The mystery behind the death of Alma’s father is vague in the Undone trailer. Based on the fan-theories and assumptions, Alma possesses qualities to feel, see, and know more than the rest of the people in the world.

In Undone’s trailer, Alma’s father can be heard addressing her as precious and carefully developed.

Adding to another mystery, Alma’s father can be seen talking to her from his grave. How is it logically possible, questions the audience.

Finally categorizing the BoJack Horseman as a dramedy, Undone is identified as a dramatic series. The theories of the comparison between the two shows are already doing rounds the internet.

With Good Omens and Lord of the Rings, Amazon is set to eye on the resourceful projects.

The trailer promises the soon availability of Undone on Amazon Prime. However, there is no official release date declared. 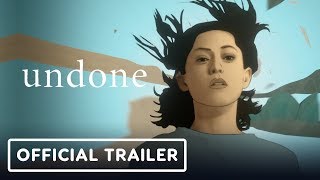