Robert Whittaker vs Israel Adesanya is a fight between two men who are all set to clash against each other in one of the most evenly matched UFC fights of 2019. This is highly unpredictable and both the men are so well matched for each other that even UFC pundits are confused as to where this fight will go. The UFC 243 main event is one of the least promoted but most anticipated bouts for fans.

Let us take a closer look at the betting odds and see who is expected to win this fight between the two.

Whittaker vs Adesanya is the hardest fight of the year to predict.

Betting Odds and Predictions for Whittaker vs Adesanya

As of this writing, the betting odds for Whittaker vs Adesanya are evenly split. Whittaker stands at -111 while Adesanya stands in at -115. This gives him a very, very slight edge over Whittaker. However, when it comes down to the actual fight, this won’t really matter. Whittaker is returning to the UFC after a long break – and is fighting in Australia, the country he represents. He will certainly have the hometown advantage.

Adesanya, on the other hand, will have a greater motivation to win this fight – this is because he is fighting not only to become the unified UFC World Middleweight Champion but he is also looking forward to ensuring that his undefeated streak remains intact.

ADESANYA VS WHITTAKER IS ALLL THAT MATTERS.

There’s a lot of confusion about the timing of this event because it takes place in Australia. Here’s a simple way to ensure that there’s no confusion. The main event of UFC 243: Whittaker vs Adesanya, begins at 10 PM ET in the US. The prelims begin at 8 PM ET while the early prelims will begin at 6:15 PM ET. 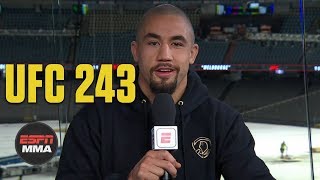