Top Gun was originally released in 1986 and it was the movie that made Tom Cruise a Hollywood superstar. Tom Cruise played the main character Maverick in the story about young Aircraft pilots fighting for the Top Gun trophy.

A sequel to the movie was in works since the last 9 years and Tom Cruise himself confirmed it in the year 2017. Top Gun 2 or simply called as Top Gun: Maverick is in production and will come out soon. Here is everything you need to know about the Top Gun sequel.

The sequel for Top Gun was rumored to be in development since 2010, and was confirmed in 2017 when Tom Gun himself posted a picture of the ongoing shoot and the title of the movie. The most amazing part is that in the age of CGI, the movie is mostly relying on Practical effects. They are flying real fighter planes in the sky and shooting it with ultra modern cameras.

As from the original cast, Tom Cruise and Val Kilmer are reprising their roles in the Top Gun sequel. Miles Teller and Glen Powell were the top contenders for the role of the son of Maverick’s friend Goose. Although Teller got the part, Tom Cruise was so impressed by Powell, that he is also cast in an unknown role.

Story of the Sequel

There is not much information revealed about the plot of the Top Gun sequel movie, but there is a vague summary. The story of Top: Gun Maverick will revolve around the inclusion of unmanned drones and how it is affecting human pilots. No matter how advanced a drone is, it could never match human accuracy and thinking. Also the subtitle Maverick indicates that the movie will largely focus on the character of Tom Cruise.

As of writing this article, there has been no official trailer release for Top Gun: Maverick movie. However, when it does release, we will be sure to update this space. 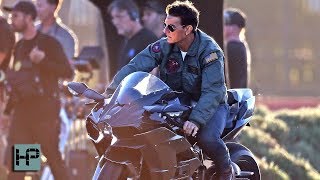