If there is one thing that kids don’t understand, it’s the term moderation. They are always up for all-or-nothing trade. Whether it playing, sleeping, or eating, they do nothing in moderation.

They don’t understand what’s good for them and what’s bad. But there is one kid who’s way more interested in eating the good stuff than the bad. Scroll down to meet her.

One little girl knew a good opportunity when she saw one and wasn’t about to let it go to waste.

3-year-old Olivia Whysall from Nottingham, England, has certainly made a name for herself after her dad left her alone for 10 minutes, only to return to find his darling daughter had devoured 18 cups of yogurt.

Her dad, Arron Whysall, posted a snap of his daughter post-yogurt so everyone could see just how hardcore she really is.

And what did Olivia have to say when she was caught on her yogurt spree?

According to his interview with, The Mirror, Arron explains, “When I found Olivia with all 18 yogurts, I asked her, ‘Have you eaten all of those?’ And she quite proudly said, ’yes.’”

The dad continued by saying, “I just thought, ’fair enough.’”

And clearly Dad wasn’t all that mad about the week’s supply of yogurt disappearing in a matter of minutes.

“Have kids they said,” he wrote in the cheeky caption for his Facebook post which has been shared more than 10,000 times.

Arron, 27, said the sight of his yogurt fiend of a daughter made him laugh out loud.

“She looked so proud of herself,” he told TODAY Parents. “I couldn’t tell her off.”

When asked how Olivia’s feeling after polishing off so many cups of the good stuff, Arron confirmed that she is totally fine: “No complaints. She didn’t get sick or anything.”

Unsurprisingly, the Facebook post is filled with comments from people who can’t get enough of this 3-year-old girl and her insatiable taste for yogurt.

“I’d like to meet this kid,” one person wrote. “They clearly know how to live.”

Another added, “Pretty sure if I had the opportunity as a kid I would have done the same.”

A lot of people found they could easily relate to Olivia or her father.

And seriously, though, how could you get mad at that adorable face for eating 18 yogurts! 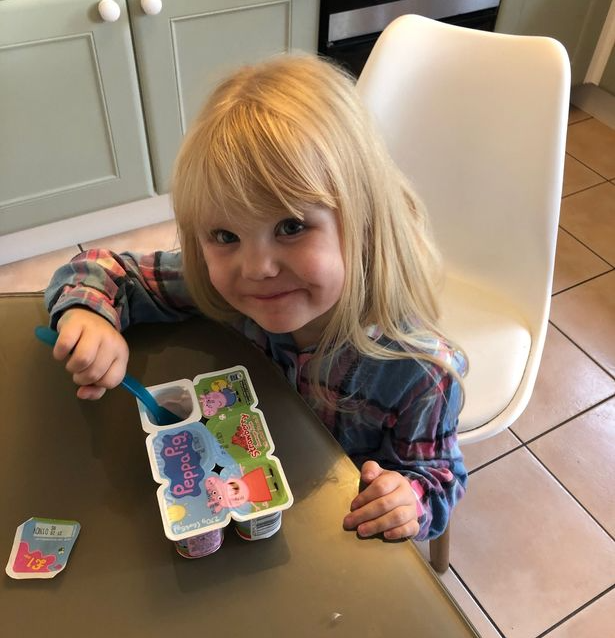 When talking about Olivia, Arron tells The Mirror, “She’s such a little character, she keeps us busy, put it that way,” and “If there’s mischief to get up to, Olivia will be the first one there.”

Personally, I don’t think I’ve ever related so hard to someone before, and I admire Olivia for shaking up the yogurt flavors to keep things interesting because otherwise she probably would have been so done at around cup number 6.

Facebook Notice for EU! You need to login to view and post FB Comments!
Tags •toddlertoddler eating 18 cups of yogurtyogurt