One of the most controversial mummies of all the time is of Ukok Princess. She was discovered buried in 1993 along with a packet of weed. Also, the women was adorned in ornate tattoos. The tattoo clearly speaks that she was a woman of high status.

After that, researchers conducted a deeper research to know more about the buried mummy. In fact, MRI scan of 2010 revealed that she was in her mid-twenties when she died due to breast cancer. That’s means the drug she was carrying all along was a method to relief pain?

Well, we are excited to know more about this story. And we know excited too. So, scroll down and get into the details.

Her Intricate Tattoos Include Mythical Creatures Dr. Natalia Polosmak, the scientist who discovered the mummy said  “Compared to tattoos found by archaeologists around the world, those on the mummies of the Pazyryk people are the most complicated, and the most beautiful.”

She further added “Tattoos were used as a mean of personal identification — like a passport now, if you like. The Pazyryks also believed the tattoos would be helpful in another life, making it easy for the people of the same family and culture to find each other after death.”

“Her skull is fully preserved, and so are the bones. DNA obtained from her remains is intriguing.” She Was Buried With Six Saddled And Bridled Horses

Six horses were buried with the Princess of Ukok and outfitted with intricate harnesses and colorful felt saddles. Marcel Nyffenegger spent months reconstructing the mummy’s facial tissues. “That two weeks took me to the brink of insanity. I didn’t spend more than two or three hours a day on that part because it was very boring and neck pain literally forced me to do something else,” he said.

She Was Buried With Jewelry And Chinese Silk

According to one researcher, “Chinese silk before was only found in ‘royal’ burials of the Pazyryk people — it was more expensive than gold, and was a sign of a true wealth.”

Her Celibate Burial Indicated That She May Have Been A Shaman “It was quite unusual to have a single Pazyryk burial. Usually men from this culture were buried with women. In this case, her separate burial might signify her celibacy, which was typical for cult servants or shamans, and meant her independence and exceptionality.”

The presence of high-status horses in her burial area indicated she herself was of high status, and researchers say this indicates a a healer.

“She had no weapons buried with her, or on her, which means that she certainly was not one of the noble Pazyryk women-warriors. Most likely, she possessed some special knowledge and was a healer, or folk tale narrator. From the inside the mummy was filled with herbs and roots.”

Her Head Was Shaved And She Wore A Horsehair Wig

“The base of the wig was a felt “hat,” with two layers of women’s hair sewn into it. Between the layers was a black flexible substance, which helped to fix and hold the shape and the volume of the wig….A mop of hair on top was tightly wrapped around with a woollen cord, which helped this mop to stand upright… On top of this mop was worn a red “nakosnik” (a braided decoration made from threads), and atop of this structure was a bronze pin with a deer, standing on a sphere. The deer was made from wood, and was covered in golden foil.” 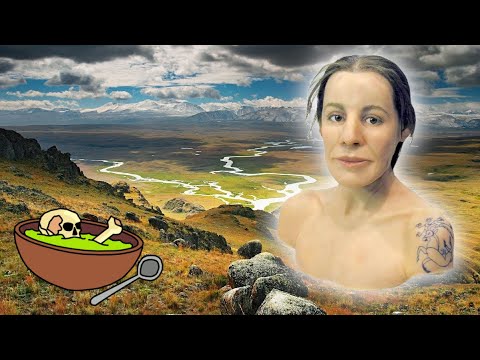 The People Of Altai Wanted Her Back, Which Sparked Disagreement With Russia

“Our ancestors are buried in these mounds. There are sacred items there. The Altai people never disturb the repose of their ancestors. We shouldn’t have any more excavations until we’ve worked out a proper moral and ethical approach.”

An Altai leader reportedly said: “We must calm people and bury the Altai Princess. We’re having Earth tremors two or three times a week. People think this will go on as long as the princess’s spirit is not allowed to rest in peace.”

In Order To Respect The Deceased, No Future Excavations Can Be Carried Out Where The Princess Was Found She Lived During Siberia’s Iron Age “The people of Pazyryk belonged to different ethnic group, in no way related to Altaians. Genetic studies showed that the Pazyryks were a part of Samoyedic family, with elements of Iranian-Caucasian substratum,” noted one scientist.