The Winds of Winter release could be in further trouble as the Coronavirus pandemic has hit the entire world. The Covid-19 outbreak has stopped production for every media project and fans are worried that George RR Martin could also stop working on the book. It has been so many years since the next book in “A Song of Ice and Fire” series has come out and the constant delays have made it much worse.

George promised that “The Winds of Winter” would come out this year but there are no further updates. The new threat of Coronavirus could further affect The Winds of Winter release and here are more updates on George RR Martin being under quarantine and self-isolation.

The Winds of Winter Delay and George RR Martin’s Promise

George RR Martin promised his fans that TWOW book will be finished soon and he will have the manuscript in his hand when he arrives in New Zealand for the Worldcon 2020. But the 71-year-old fantasy author has made several such promises before and didn’t deliver on any one of them.

Ever since Game of Thrones TV series on HBO ended with a bad Season 8 finale, fans are looking forward to the Winds of Winter to have a better ending. There are also reports that GRRM is rewriting several chapters of the book and change the ending compared to the GOT show.

George RR Martin under Quarantine for writing The Winds of Winter

George RR Martin has announced that he is well aware of the Coronavirus threat given his old age and physical condition, which is why he went into self-isolation and is attended by only one of his staff members. The author says that he is getting more time to write The Winds of Winter these days.

GRRM also added that he has been spending more time in Westeros than the real world these days which is a good thing. The whole Covid-19 quarantine will lead to the timely completion of “The Winds of Winter” and the next book in the ASOIAF series could come out around the end of this year. 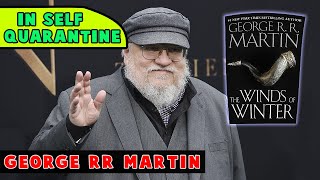