The Winds of Winter release date might be delayed once again as George RR Martin has other plans for the sixth book in the ASOIAF series. The 71-year-old author has promised that TWOW will come out in Summer 2020, but it looks like he might be breaking his promise once again. GRRM is already busy writing other books, scripts for video games and TV series which is why ‘The Winds of Winter’ is not completed yet.

it’s almost been a decade since a dance with dragons was published and grrm is not yet done writing the winds of winter. 😢

While the latest reason suggests that George is indeed working on Winds of Winter, it also indicated that the book will be delayed. George RR Martin has decided to change the ending of ‘The Winds of Winter’ book after Game of Thrones Season 8 ending received a bad response and it will just delay the book launch further.

Game of Thrones TV series ending was just an experiment as per certain fans, GRRM just wanted to see how do people respond to a specific climax. Now that Martin knows that the people hated it, he will change the book story of TWOW accordingly. Although it sounds like a baseless assumption on the part of the author, it must also be noted that George RR Martin himself has said that, ‘People know an ending, they don’t know the real ending.’

As per the reports from a German newspaper, GRRM is rewriting several parts of ‘The Winds of Winter’ and has announced that it will delay the actual launch date of the book. The ending of TWOW book in the ASOIAF series will be totally different from HBO’s Game of Thrones TV series ending.

The Winds of Winter release date was earlier set as Summer 2020 and George RR Martin promised that he will have a copy of the book in his hand when he arrives in New Zealand for Worldcon. But the author is now no sure whether he can deliver the book in the next 4 months and there are many reports claiming that Winds of Winter will now release in 2021 instead. TWOW novel is delayed for sure with its launch date postponed to almost a year. 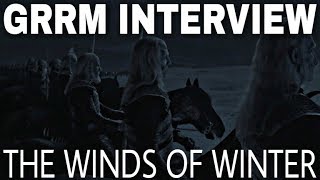