The Marvelous Mrs. Maisel is probably the best original show on Amazon Prime. Set in the 1960s of America, where a divorced woman named Midge becomes a stand-up comedian. It does an incredible job of covering her personal life and how she uses her sorrows to make jokes.

While the first two seasons of The Marvelous Mrs. Maisel were praised by the critics and loved by the audience, Amazon has just released the trailer for Season 3 of the show. Here are the details on the trailer, release date, plotline, cast and so much more for the third season. 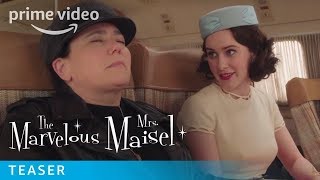 The trailer for the third season of Marvelous Mrs. Maisel has been portrayed as a musical. Without giving much information about the plot, it gives us an idea that Midge has gotten popular. She is touring the country with her and friend Susie and performing in front of bigger audiences. It also gives glimpses on some courtroom drama and how she has gotten in good terms with her husband Joel. Along with that, the parents of Midge has finally accepted her job as a stand-up comic and are doing fine with it.

i'm beyond excited about “the marvelous mrs maisel” coming back with a third season this december! 🎙✨
if you need a show to binge watch i highly recommend this one as it's hilarious and so aesthetically pleasing!@RachelBros @MaiselTV #MrsMaisel pic.twitter.com/pY1ZwOcAV8

Amazon has lately been killing with its original shows and The Boys is the best example. Before releasing any new shows, they are giving the audience time to freshen up the first two seasons of The Marvelous Mrs. Maisel. All the episodes of Season 3 will release on December 6, 2019, on Prime Video.

The Marvelous Mrs. Season 3 will revolve around Midge getting famous all over the US country. Up until now, she has performed only around New York, but now she’s getting bigger and performing even for the US military service. There will also be a courtroom drama involved over the legal case of her divorce. It will be interesting to see with the secret act our of the story, what they will do with Midge next.

What if The Marvelous Mrs Maisel takes place entirely inside the mind of the murdered prostitute from House of Cards pic.twitter.com/L2fS8QwPaE

Rachel Brosnahan, Alex Borstein, Michael Zegen, Marin Hinkle, Tony Shalhoub, Kevin Pollak and others will reprise their role from the first two seasons. It is being reported that there will be a total of 8 episodes in the third season of The Marvelous Mrs. Maisel. While the second season had 10, the first one also had 8 and the budget will be increased. There are also rumors that the show will run for a total of 5 seasons and Mrs Maisel’s story will end with that.