How much amazing would it be if you are on a yacht and it turns invisible to everyone? Well, that’s some kind of sorcery right? No, it’s not sorcery, its just science. A $200 million superyacht is so beautifully covered in mirrors that it will be invisible to the naked guy if its just 50m far.

Plans for an ‘invisible’ superyacht have been unveiled. This $200 million Super Yacht is made in such a way that it soon as it sails, it blends in with the sea becoming invisible to the normal eye.
The 106-meter Mirage will be completely covered in a special mirrored glass which reflects the image of the sea back to the onlookers.
The 4200-tonne vessel will seem to vanish but can be detected by any radar. Meanwhile, the Yacht will have its own safety radar to look out for smaller boats which might come on a collision course.
This superyacht is designed to be the dream purchase for hiding billionaires who like to spend their private time in as much luxury as they can afford. The Mirage will fully be equipped with an outdoor theatre, helipad, spa, and cinema.
The six decked craft can accommodate 14 guests and 29 crew members and can cruise at a comfortable speed of 19 knots. 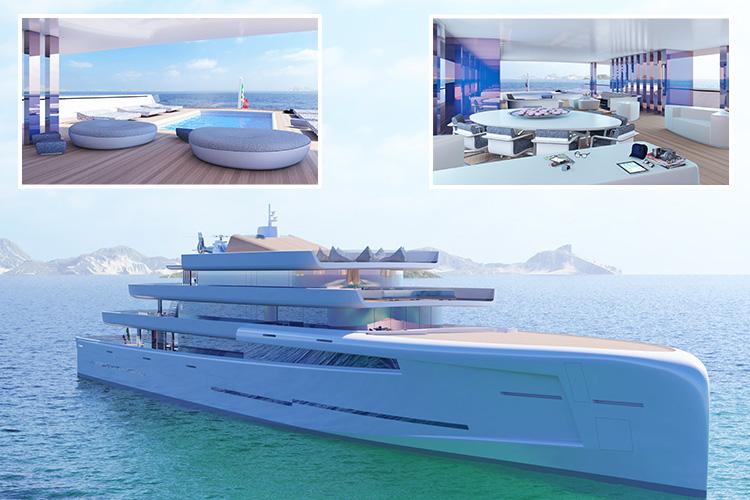 The 106-metre vessel was designed by Dutch firm Van Geest Designs and Italian boat builders Fincantieri.
Designer Pieter Van Geest said that it took one complete to develop the blueprint. It would take an additional 3-4 years to construct. He also added,

“The longest part was researching the reflective glass and how it would be built.”

Mr Van Geest declined to put a price on this Mirage, but maritime experts suggested £200million would be reasonable for such a unique, luxury vessel.

The lIst is currently topped by the Malaysian owned £4billion History Supreme, which is made of solid gold
Source- Daily Mail