Sword Art Online Season 3, also called the Alicization arc, is coming up with more stories. The fans won’t have to wait long as the new episodes will be out this October.

The first half of the Sword Art Online anime ended on a major cliff hanger earlier in March. Kirito and Alice reunited after defeating the Administrator and the Underworld is shattering. In the process, they lost a great deal. Watching Eugeo die shattered him. He was badly injured and almost lost his arm.

Producer Aniplex previously confirmed that Sword Art Online Season 3 contents could be equivalent to forty-eight to fifty-two episodes. There is a possibility that the second part “War of Underworld” will consist of twenty-four more episodes.

The continuation of the third season does not have a specific release date yet. We only know that the series will continue in October this year. Based on the events in the first half, the upcoming volumes will cover the contents of novel volumes fifteen to eighteen. 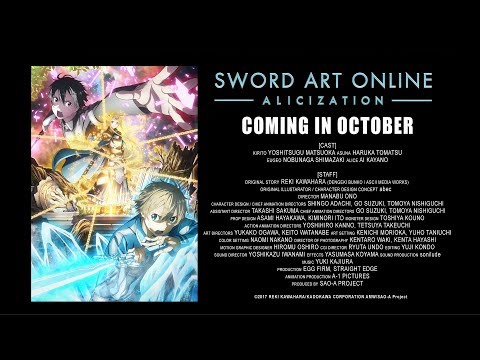 Sword Art Online Season 3 will have its second half to continue from Kirito’s last contact with the real world. Even the Ocean Turtle is under a huge threat and it would directly affect his performance in the virtual world. But Alice would be there to help him out in whatever is to come next.

In the first half, Kirito and Eugeo aimed at reaching the Central Cathedral’s hundredth floor in order to bring back Alice and her memories. In the upcoming episodes of Sword Art Online season 3 part 2, Alice and Kirito’s next mission could be finding the World End Altar.