Kansas City Chiefs vs San Francisco 49ers Super Bowl 54 game will be one of the most viewed games of this year and there will be huge bets on it. The Chiefs are everyone’s favorite team but the 49ers have performed way better. Super Bowl LIV betting odds will be based on player performance, offense, defense, roster combination and a lot more.

Super Bowl: Chiefs vs 49ers odds, over/under predictions, spread picks, total score are out and it looks like a close game where any of the sides can win. Meanwhile, several other predictions have already announced the Super Bowl 2020 results and we will soon find out which of them turns out to be true.

Chiefs vs 49ers betting odds keep changing with time and both sides have a huge number of fans which will be betting on their favorite teams. Here are the current betting odds and other picks for Super Bowl 54 game between Kansas City and San Francisco clubs.

More than 83 percent of the people have placed their bets on the over, which is why the number has been increased from 51.5 to 54.5 in the last two days. It could even reach above 55 on Sunday when the Super Bowl game of 49ers vs Chiefs actually starts.

NFL Madden game franchise has been correctly predicting the winner of Super Bowl for the last few years and they have announced their winner for this year too. The video game predictions say that the Kansas City Chiefs will beat the San Francisco 49ers for a 35 to 31 record and win the Super Bowl LIV championship trophy.

AND THE WINNER IS?: Fiona the hippo at the Cincinnati Zoo vomited while making her Super Bowl prediction on Thursday. Who do you think she’s picking? pic.twitter.com/S5FvTZ9uiZ

Fiona, the famous Hippo who has been predicting the correct winners of Vince Lombardi trophy has vomited on the Chiefs logo over the 49ers. It means that the Kansas City Chiefs are destined to win the Super Bowl 2020 title as per Fiona and a lot of other predictions. 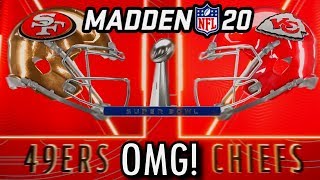